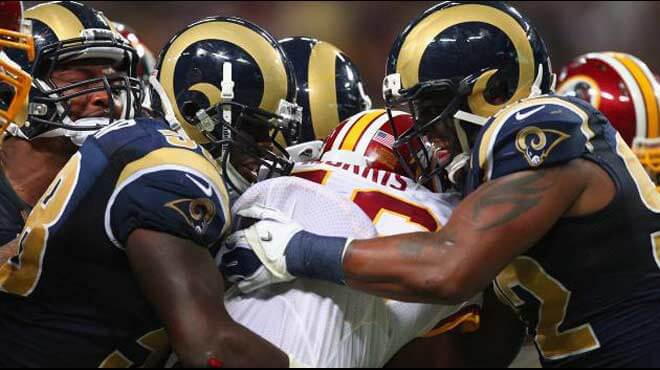 After a successful day of college football betting, online sportsbook players are ready to shift their focus towards the National Football League. Heading into Week 7’s action, there are plenty of enticing matchups to keep bettors invested in the day’s games. There’s Falcons vs. Patriots, Seahawks vs. Giants, and Bengals vs. Steelers to offer a broad variety of professional football battles to suit fans’ individual interests. But even among these eye-catching pairings, NFL betting players will want to pay special attention to the contest pitting the Arizona Cardinals against the Los Angeles Rams. Let’s take a look at what kind of action US sportsbooks are predicting for this NFC West rivalry.

The Arizona Cardinals fly into this Sunday’s matchup sporting a 3-3 record that ranks them 3rd in the NFC West. Right now the Los Angeles Rams are leading the division with the 3-2 Seahawks sitting at the No. 2 spot. Arizona’s 3 losses of the season have come against the Detroit Lions, the Dallas Cowboys, and the Philadelphia Eagles. The Cardinals 3 wins on the year have come against the Indianapolis Colts, the San Francisco 49ers, and the Tampa Bay Buccaneers. The Cards barely edged out a victory over the Bucs this past weekend, as the 38-33 finish easily could’ve gone the other way. With their current record, the Cardinals have a chance of usurping the Rams this Sunday. The top sportsbooks around the web are siding with the Rams however, pegging them as a 3 point favorite on the spread line.

The Cardinals got a slow start to the season but their offense has been able to rebound recently. Specifically their passing game, which currently ranks 3rd in the NFL. On the ground Arizona ranks dead last in the league. However, the Cards are looking to change that by bringing in Adrian Peterson from the New Orleans Saints. The Saints’ pass-heavy offense was counterproductive to Peterson’s running style – which requires more than a handful of carries per game. Arizona will be contending against the NFL’s 29th worst run defense so it wouldn’t be shocking to see them run well over two dozen times this Sunday.

The Rams are 4-2 and are coming off a 27-17 win over the Jacksonville Jaguars. Los Angeles has also picked up wins over the Indianapolis Colts, the San Francisco 49ers, the Dallas Cowboys, as well as the aforementioned Jags. Rams’ fans are no strangers to early season success but it would be new to see the Rams remain near the top of the division towards the end of the year. A win against Arizona this Sunday would go a long way to cement their standing in the division, and maybe even help erase that loss against Seattle.

Much to everyone’s surprise, the Rams are actually the NFL’s No. 1 scoring offense. A big part of that has come from the defense however, who has been able to find the end zone a few times themselves. Nevertheless, Los Angeles still wields the league’s 8th best total offense, 10th best passing offense, and 13th best rushing offense. This Sunday, Jared Goff & Co. will have to compete against a defense that ranks 28th in scoring, 25th against the pass and 9th against the run. The Rams might not have that much success on the ground this Sunday, but they should have zero issues finding the end zone through the air.