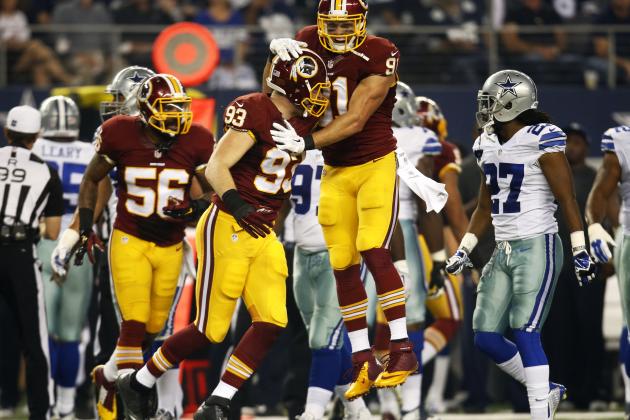 The best sportsbooks for US players favor the home team when the Washington Redskins and the Dallas Cowboys play on Thursday in Week 12 of NFL action from AT&T Stadium.

The Skins are field goal road dogs according to the best online sportsbooks. For veterans like defensive end Ryan Kerrigan, this is an opportunity to show younger teammates what it’s like to get ready for and perhaps win a big game.

“As weird as that is to say at 3-7, we’re still very much in it,” Kerrigan said following practice on Monday. “Hopefully, we can make it happen down the stretch here.” Washington appears to have a bright future for the first time in a long time. New head coach Ron Rivera has a solid defensive line, which has shown it can maintain a lead.

Once Washington took the lead in the third quarter on Sunday versus Cincinnati, the line had four sacks in a 20-9 win. Washington has a sound running game with rookie Antonio Gibson, a wide receiver from Memphis who has a team-best 530 rushing yards. Last week, he had 94 against Cincinnati, including his 8th touchdown of the season.

Terry McLaurin is on his way to close to 100 catches. Veteran QB Alex Smith had his first win in over two years on Sunday. In his first 24 games, McLaurin has the stats of a No. 1 receiver regardless of the offense. His 1,790 receiving yards to this day are 12th most all-time in 24 games and ahead of one Jerry Rice (1,757).

“If you systematically run the ball and grind the clock and control it, you can control the tempo,” Rivera said. “If you’re shutting down the run and you get pressure on the quarterback, you’re allowing the defensive backs to make plays. There are different ways to win.” McLaurin has 11 games with 80+ receiving yards in spite of a revolving door at QB in his two seasons.

The Cowboys are three-point home faves per the best sportsbooks for US players. The cornerback position has been a source of concern for Dallas. The Cowboys’ pass rush is anything but consistent. Dallas rallied from two fourth-quarter deficits and won 31-28 at Minnesota on Sunday. Andy Dalton’s two-yard TD pass to Dalton Schultz with 1:37 remaining in the game helped Dallas end a four-game skid.

It was Dalton’s first game since October 25. That was when Washington LB Jon Bostic brutalized him in the third quarter with a late hit to the helmet while Dalton slid to end a scramble. A struggle with COVID-19 kept Dalton out as Dallas continued to switch back and forth between third and fourth-string QBs with little or no success.

The Cowboys offense seemingly gave up the ghost when Dak Prescott’s season ended with a leg injury in Week 5. but it finally showed gumption with almost 400 total yards. Their four TDs were twice as many as they scored in the previous four games.

“Everything’s in front of us. It doesn’t matter what we’ve done up to this point,” Dalton said. “It’s all about these next seven games.” One recurring issue Dallas must face on a short week is a lack of healthy players at cornerback. Starter Anthony Brown left Sunday’s game in the fourth quarter. Rookie starter Trevon Diggs is on injured reserve. Head coach Mike McCarthy said on Monday that Brown would give it the old college try at practice on Tuesday. But it isn’t sure whether he’ll be ready.

There’s not a lot to lure users of the best sportsbooks for US players in on this matchup. Washington won the last meeting 25-3. But seeing as how Dallas scored 31 on the Vikings this game will probably be closer. Washington has scored 20 or more points in each of the past four games. So they should have enough chances to get the cover in this one.