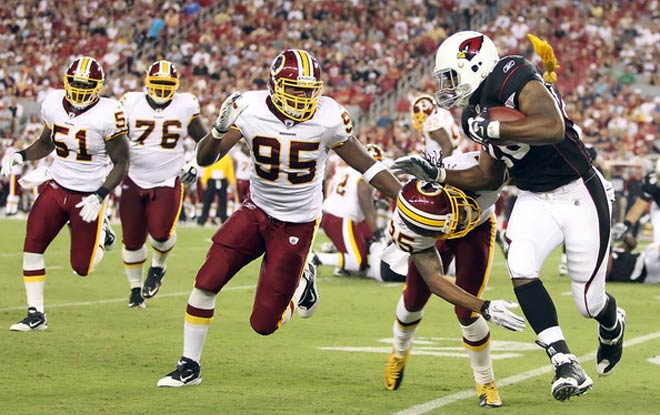 The best NFL betting sites favor the Arizona Cardinals by 6.5 points over the Washington Football Team in their 2020 NFL regular season Week 2 game on September 20 at 1:05 p.m. at State Farm Stadium.

The Redskins are the road underdogs according to the best online sportsbooks. Washington was a bit tentative in the first half versus the Eagles in Week 1. To their credit, though, they came back from a 17-7 deficit at halftime. Philadelphia was mistake-prone and ineffective in the second half. Washington managed to score 20 unanswered points to take a big opening win.

Washington quarterback Dwayne Haskins threw for 178 yards and a touchdown on 17 of 31 passing. Peyton Barber rushed on 17 occasions for 29 yards and two TDs. Leading the Washington receiving unit was Terry McLaurin with five grabs for 61 yards.

Arizona had some difficulty shaking off the Niners in Week 1. But they remained in control for most of the contest. The Cards had a 13-10 deficit heading into halftime and did not score in the third quarter. Arizona was able to get two touchdowns in the fourth to steal a 24-20 comeback win.

In the Week 1 win, quarterback Kyle Murray threw for 230 yards, a touchdown, and one interception on 26 of 40 passing. Murray also rushed for 91 yards and a score on 13 carries. Newly-acquired star wide receiver DeAndre Hopkins hit the ground running with 14 catches for 151 yards.

We’re leaning toward Washington on this one, though it’s quite close. The early returns on Arizona show promise. Murray had a solid performance, and Hopkins was as good as ever. Great showing as usual, and we will probably see many shots downfield toward the duo of Hopkins and Larry Fitzgerald. Having said that, if Washington can keep it close on defense by preventing those explosive pass plays, they have got enough offensive prowess to keep within a score. Arizona wins this one, but the Washington Redskins keep things interesting.