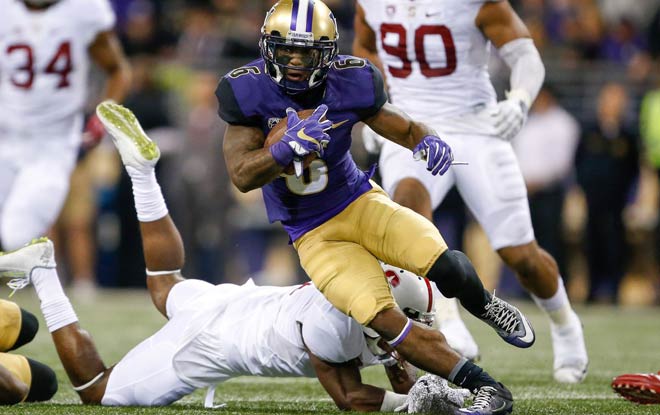 Top USA sportsbooks online favor the Washington Huskies by 3 points over the Boise State Broncos, as the spread goes for the 2019 Las Vegas Bowl on December 21, 2019, with kickoff scheduled for 7:30 p.m. EST, at Sam Boyd Stadium in Whitney, Nevada.

Washington’s total offense ranks 74th in the country with 395.4 yards per game. The Huskies score 31.5 points per game, tied for 47th in the NCAA.
Linebacker Joe Tryon has eight sacks, and defensive back Elijah Molden has 70 tackles and three interceptions. Washington’s defense is nothing special, but they do have the 23rd-best scoring defense (20.4 points allowed per game).

This will be Chris Petersen’s last game as Washington head coach. “His record truly does speak for itself as well as his consistency and his ability to stay in places for a long period of time. Petersen has a career record as a head coach of 146-38. He has been to a bowl game every year as a head coach and has never had a record worse than 7-6,” writes this dude. “Coach Petersen got his head coaching start a Boise State and built them into the program that they are today.

He coached at Boise State for his first eight seasons as a head coach before coaching at Washington the last six. He was the offensive coordinator at Boise State before taking over as the head coach there in 2006.”

The Broncos won the MW Mountain Division with an 11-1 record – going undefeated in conference play. BSU went on to beat Hawaii 31-10 in the MW championship game. Overall, Boise State finished 8-5 ATS, according to top USA sportsbooks online. Starting QB Hank Bachmeier is 122 of 193 (63.2%) for 1,760 yards with nine TDs, four picks, and 15 sacks.

Wide receiver John Hightower has 48 catches for 923 yards and eight TDs. Running back George Holani has rushed for 979 yards and seven TDs. BSU’s 38th-ranking total offense averages 441.5 yards per game. The Broncos also have the 14th-best scoring offense with 36.8 points per game.

Linebacker Curtis Weaver has 13.5 sacks, linebacker Riley Whimpey has 72 tackles, and safety Kekoa Nawahine has three interceptions. BSU allows 234.4 passing yards per game, which ranks them 83rd in the country. Conversely, they hold opponents to 112.3 rushing yards per game (19th). Additionally, their 24th-ranked scoring defense allows just 20.6 points per game.
The Broncos are 5-1 ATS in their last six bowl games as an underdog. 4-1 ATS playing a team with a winning record. And 7-2 ATS in their last nine neutral site games as an underdog.

Petersen’s Huskies have lost three straight bowls. However one was a CFP semifinal and the other two New Year’s Six bowls. In the comparatively small pond of the Las Vegas Bowl, Washington should be able to buck that trend.