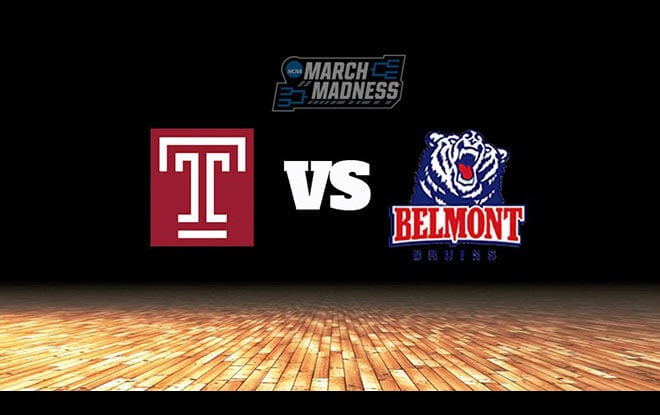 The best USA betting sites favor the Belmont Bruins by 3.5 points over the Temple Owls in their First Four matchup. The Bruins finished the season with a 26-5 record (16-2 in OVC play). According to the best online sportsbooks, Belmont also covered the point spread in 18 of those games. However, they lost the Ohio Valley Conference championship game 65-77 to Murray State as two-point chalk. The Bruins received an at-large bid to the NCAA Tournament as a No. 11 seed. Meanwhile, The Owls had a 23-9 record (13-5 in American Athletic Conference play) in the 2018-19 season. Temple also finished 15-15-2. They lost in the ACC quarterfinals 74-80 to Wichita State as 1.5-point favorites. Like the Bruins, the Owls earned a No. 11 seed. As it turns out, though, Temple was the third-to-last school to be selected for the tournament.

The Bruins offense scored its second-fewest points of the season in the aforementioned OVC championship game. Purdue had previously held them to 62 in late December. Other than that, Belmont always scored in excess of 70 points, even in losses. The Temple game being another inter-conference game like the Purdue one, we just might witness a similar outcome. Then again, gamblers may feel they can have confidence in the Bruins. As much confidence as the NCAA selection committee had. Because this is the program’s first-ever at-large bid. “They made the most of the opportunities they had; had two wins in Quadrant 1, and we just thought they were a phenomenal basketball team,” selection committee chairman Bernard Muir said. “They’re a team very high on the offensive front, great offensive efficiency, and we thought deserving. They belong in the field.”

According to the best USA betting sites, Belmont is 3-1 SU and ATS as favorites of four points or fewer this season (O/U 3-1).

The Owls snuck into the NCAA tourney like the proverbial thief in the night. “We thought Temple had one of the better wins, beating Houston, and only one loss in the third-fourth quadrant [15-1 record], and that was a rival game with fellow Big 5 team Penn,” Muir said. “Temple tied for third in the league, and it [the American Athletic Conference] is a good league, and [they] had a good win over UCF, and that is what ultimately got them in the tournament.” Temple had been absent from the tournament since 2016. Which means their only player with tourney experience is guard Shizz Alston Jr. Fo’ shizzle, ma nizzle. But then, Belmont has missed the tournament since 2015. Thus, experience – or lack thereof – should not play a big part in the game.

Temple is 6-2 SU and ATS as an underdog of four points or fewer this season. Additionally, the Owls are 10-7 SU in games away from Philadelphia.

Pick: The Bruins had the second-best scoring offense in the country. Belmont averaged 87.4 points per game in the regular season. Nonetheless, the majority of their opponents were among the bottom 50 scoring defenses. On the other hand, Temple’s defense kept 13 of their games under 155 points. Moreover, Belmont games tended to go under the total by double digits when playing top 100 defenses. The Bruins may have enough to go toe to toe with some of the best the ACC has to offer. However, the under might be a safer bet for users of the best USA betting sites.