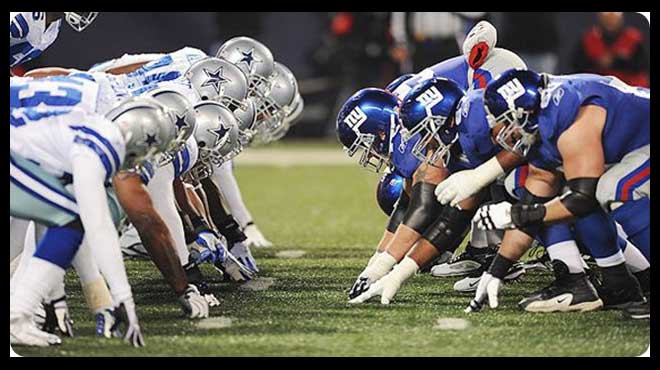 This Thursday marks the official start of the 2017 online NFL wagering season. It might have felt like forever, but offshore sportsbook fanatics finally have the opportunity to wager on NFL games once more.

Heading into the 2017 season, most top sportsbook experts believe that the NFC East will be the toughest division in the league. Last season, the Eagles, Giants, and Cowboys all had an opportunity to qualify for the playoffs, with the Giants and Cowboys actually cracking the cut.

Now heading into this year’s season, the NFC East could be up for grabs. Everyone in the division got a good look at Dak Prescott last season, so the Cowboys won’t be able to come in and stun the East. Likewise, Ezekiel Elliott’s suspension leaves Dallas rather vulnerable. The only problem for the Giants is that Elliott’s suspension won’t take effect until Week 2, so Elliott will still be able to suit up this Sunday night. Let’s find out what the best online sportsbooks are predicting.

What are the big-play opportunities the #NYGiants can make on Sunday? @Schmeelk breaks down last year's film >> https://t.co/MvUHxL4dvz pic.twitter.com/zrYZC3GcPR

As most online NFL betting players would assume, online sportsbooks have come out in favor of the reigning NFC East champions.

The Cowboys shocked the entire nation last year when they took two rookies; Prescott and Elliott, and rode them all the way to the NFC divisional round. Dallas was able to mount a 13-3 season that few could’ve imagined, winning their first divisional title in two years. The Cowboys performed so well that they earned themselves a 1st round bye. Looking back, the rest might have done more harm than good as the Boys would go on to lose their divisional match against the Green Bay Packers 31-34. But hey, sometimes you just can’t help running into Aaron Rodgers.

The Giants had plenty of problems in 2015. New York felt like many of those issues would roll over into the 2016 season, since longtime coach and NFL legend Tom Coughlin officially retired. But Ben McAdoo was able to step in and lead this team to an 11-5 season. They might not have won the division, but they did earn a ticket to the playoffs. That ticket wouldn’t amount to much however, as New York was instantly eliminated by the Packers in the Wild Card round 13-38.

Best Online Sportsbook Picks to Make: The Cowboys are the favorites but their victory is in no way, shape or form guaranteed. Instead, bettors might want to bet against Dallas and cash in on that lucrative line available for New York.