Steelers are Betting Favorites at Sports Betting Sites on TNF vs. Titans 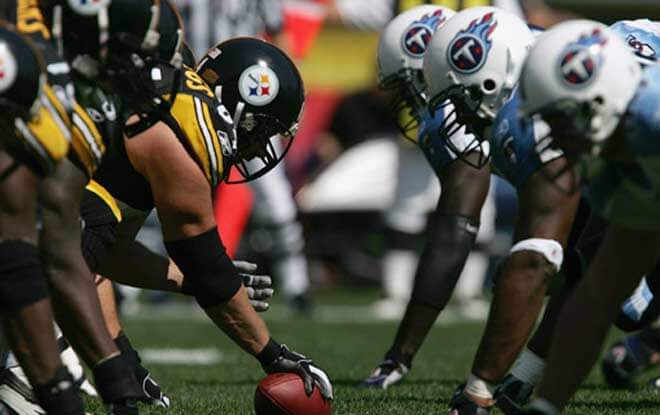 Sportsbook US players who bet on last season’s action will recall that the Pittsburgh Steelers came within a game of competing for Super Bowl glory. The Steelers, led offensively by quarterback Ben Roethlisberger, Antonio Brown, and Le’Veon Bell, donned a personality of one of the most explosive offenses in the league and backed by a more than capable defense emerged as legitimate title contenders. However, there wasn’t a franchise on the planet that would’ve been able to stop Tom Brady and his vendetta of winning a Super Bowl trophy the same season in which he was suspended for 4 games for a suspected violation of the NFL’s policy. But now that Brady has fulfilled his agenda, is the door perhaps open for a Pittsburgh title run? A lot of sports betting sites seem to think so. Either way, Roethlisberger and Co. will have an opportunity to prove to the NFL betting community that they are the frontrunners to win the AFC, scratch that, the NFL in 2017. Let’s take a look at what kind of odds the Steelers are facing this Thursday as they host the Tennessee Titans.

The Titans, much too every sports betting sites’ surprise, have emerged as 2017’s No. 1 contender in the AFC South. Tennessee turned in a 9-7 season in 2016 so while we were expecting some improvements from the Titans, we weren’t quite expecting them to be the leaders of the division 10 weeks into the year. But Tennessee’s 6-3 record on the year gives them the lead in the AFC South over the 6-3 Jacksonville Jaguars – the division’s number 2. Despite having the same record, the Titans’ Week 2 triumph over their divisional rivals ensures that they get the lead in the South.

In addition to leading the division, the Titans also come into this Thursday night contest riding a 4 game winning streak. During that tenure, Tennessee has picked up wins over the Colts, Browns, Ravens and Bengals, so they haven’t exactly been beating the best teams in the league. That will change this Thursday when the Titans face the Steelers. If Tennessee can pull off the upset, they’ll validate themselves in the eyes of sportsbook US players. If they can’t they will just confirm what many people already believe to be true: that Tennessee is a mediocre football team.

The Steelers enter this Week 11 matchup happily sporting a 7-2 record that gives them the lead in the AFC North. Pittsburgh has been practically uncontested in the division this year, with the 4-5 Baltimore Ravens being their biggest threat. Obviously a team with a losing record isn’t going to challenge you much so it’s safe to say that the Steelers are looking ahead each Sunday to keep themselves focused on the goal. However, there is but one other 7-2 team in the AFC: the New England Patriots. The fact that these two share a record forces us to talk about the Steelers and Pats potential rematch in the AFC Championship game. Pittsburgh’s trip to the playoffs is all but guaranteed and the low-level of competition the AFC offers ensure that the Steelers will go deep into the playoffs. They’ll also be going deep into the Titans this Thursday.