Sportsbooks and US Players Prepare for Week 9 Thursday Night Betting 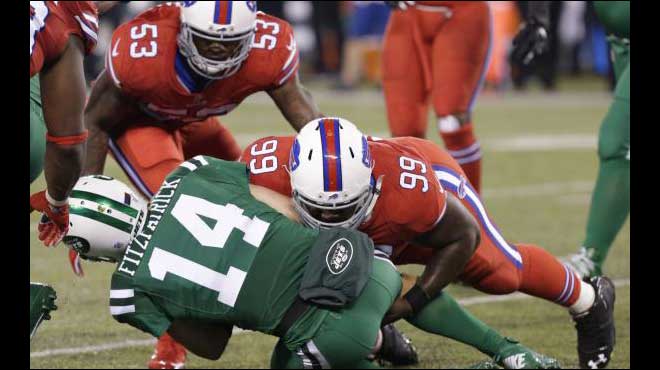 This upcoming Thursday night, sportsbook US players will have the opportunity to wager on an AFC East matchup that is bound to deliver some interesting betting results. To kick off Week 9’s action, the Buffalo Bills will be playing host to the New York Jets. Of the two, the Bills have unquestionably been having the better season. However, an upset against a divisional rival might just be what New York needs to get this ship, or jet, back on track. Let’s take a look at what NFL sports betting websites are predicting for this upcoming Thursday night.

The Jets fly into this Week 9 matchup flashing a 3-5 that ranks them as the worst team in the division. It’s not surprising to see the Jets struggle this far into the season, considering the start the franchise had to the 2017 season. To kick things off, New York managed to lose their first two games of the year by a lopsided result. Afterwards, the Jets managed to bounce back and actually built a little bit of momentum as they managed to post a 3 game winning streak. However, a closer analysis of these wins will reveal that the Jets didn’t beat that great of teams; the Miami Dolphins, the Jacksonville Jaguars and the Cleveland Browns.

After pulling one over the winless Browns, New York suffered a 24-17 setback to the New England Patriots. That game ended in a bit of controversy, as many sportsbook US players felt that the Jets were robbed of a late-game victory that would have all but sunk the Pats’ dreams of leading the division. Since that hallowed game, New England has posted a win streak and New York hasn’t been able to win a game. That speaks volumes about the type of coaches surrounding both these players.

The Bills have been finding an unprecedented amount of success this year. Buffalo, in recent years, has been the kind of team that has a tremendous amount of talent on both sides off the ball but never seems able to mount a playoff run. Nonetheless, 2017 might just be the Bills year. Buffalo comes into this Thursday night contest flashing a stellar 5-2 record that ranks them 2nd in the AFC East and pegs them as the frontrunners to knock off the New England Patriots in a division that perennially seems to belong to Bill Belichick and Tom Brady. The Bills haven’t faced the Pats yet this season but they’ll need to tie them in wins first before usurping them in the divisional standings. God knows seeing the Bills top the Pats is something sportsbook US players would love to witness.

The money line has yet to come out for this contest but judging by the fact that the Bills are a 3 point favorite on the spread line, good sportsbook lines can expect Buffalo to be the favorite straight up. The line won’t favor them all that heavily, but they’ll still get the backing from bookmakers. Rightfully so given the stark differences in both team’s records and offenses.