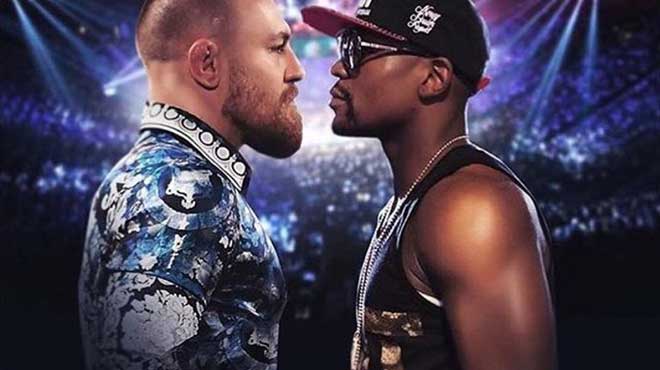 According to Connor McGregor, and offshore sportsbooks, “I’m gonna knock [Floyd ‘Money’ Mayweather Jr.] out inside four rounds, mark my words. The movement, the power, the ferociousness—he has not experienced this.” And after he KOs Money within four rounds of their fight, Con is eventually “going to run Showtime, too, if they want me back in the boxing game once I spank Floyd – because Floyd’s gone. Floyd doesn’t have much left. Then who has Showtime got?” If this weren’t such classic Mac behavior we would be tempted to theorize that the fight’s already happened and Floyd hit McGregor so hard he sent him back in time with brain damage.

Then again, Money is about to receive an invitation to join MENSA any time soon. “When I wake up in the morning, I forget that I’m famous,” he said. Pretty sure that’s not the only thing he has trouble remembering. Yet the fans are eating it up. “You’re bringing the best of two worlds together,” ESPN.com quoted Jon McFaul, a New Jersey McGregor fan, as saying. For his sake let’s hope he was misquoted and he actually said ‘worst.’ “Mike Tyson back in the day knocked out people in the first round. I want to see the spectacle,” McFaul added.

According to U.S sportsbooks, though, and regardless of Mac’s predictions, this is going to be a Tyson-like beatdown. Now to give the devil his due, Conor predicted the outcomes of his bouts with Diego Brandao, Dustin Poirier, Jose Aldo, and others. But those were mixed martial contests that never went beyond five rounds – even if Mac hadn’t put away most of his opponents in the first two, five is the limit per the rules. Money is accustomed to going 12 rounds and is undefeated in all those hundreds of rounds. Thought it is worth noting that most if not all of those 12-round bouts were won by attrition – meaning that Money never exactly exerted himself.

Needless to say, his boxing fights are not the Raging Bulls and all the Rockies we grew up with. And speaking of movies, rumor has it there might be a Conor McGregor movie in the works. And why not? Dude’s already living out The Great White Hype – though he doesn’t seem aware of how that ended. But to be fair, Quentin Tarantino could do wonders with a character like Mac – what with his “dance for me, boy” comments and whatnot. And Mac could use the money too; according to UFC chief Dana White, Conor – who has threatened to “bounce an elbow off [Mayweather’s] eyebrow” – “would have a lawsuit against him that would destroy Conor’s life, and Mayweather would win” if the Irish brawler has a lapsus mentis and resorts to an MMA move during his fight with Money. “He would be sued beyond belief if he does anything but hit Floyd Mayweather with his hands to the head and body.” He may not even have a chance to land legal shots, though, according to his sportsbooks’ chances, let alone illegal ones.

Coming Soon – The official story of the unstoppable rise of @thenotoriousMMA Conor McGregor.
Happy birthday to the champ champ! pic.twitter.com/rjv2VYdMie