Now that the conference championship is in the bag, US sportsbook players can begin to look ahead to Super Bowl LII. Once again, and in the most unsurprising manner possible, the New England Patriots are representing the AFC in the league’s title match. But once again, in a surprising manner, the Eagles have an opportunity to dethrone Bill Belichick & Co. on the biggest stage in pro football. What kind of favoritism are the best online sportsbooks showing the 5-time Super Bowl champion Tom Brady in this year’s Super Bowl?

The Eagles road to the Super Bowl began early in the season when the team posted a 10-2 record through the first 12 games of the season. During that tenure, Philadelphia proved that they were one of the most explosive and most consistent offenses in pro football. Likewise, throughout the regular season, the Eagles were able to train and develop one of the best defensive units in the NFL. All in all, the Eagles would finish the regular season with the 3rd best scoring offense, 7th best total offense, 13th best passing attack and the 3rd best running offense. Those numbers are extremely impressive and it’s easy to understand why the Eagles are competing for the title come February.

Although Philly had a great season, what the franchise was able to accomplish in the postseason was arguably even more impressive. In the NFC divisional round, the Eagles hosted the Atlanta Falcons. Atlanta gave it all they had, but behind a stellar outing from their defense the Eagles rode off 15-10. In the next round, the Eagles would deliver an even more surprising finish. This past weekend, the Eagles picked apart the Vikings 38-7. It was great to watch, and now the entire NFL is hoping they can do something similar to the Patriots come February.

Let’s be honest. When the season began, every US sportsbook player knew the Pats were going to make it back to the Super Bowl. What we didn’t know is just how easy they would make it look. New England, with a 40-year old quarterback under center, finished the season with a 13-3 record to win yet another AFC East title. Once in the playoffs, New England would make quick work of the Tennessee Titans in the AFC Divisional round. Specifically, the Titans got romped 14-35. But that victory didn’t surprise any of us. What did was seeing New England dodge the bullet that was the Jacksonville Jaguars in the AFC Conference Championship.

The Jags had everything they needed to get the job done; a great defense and Tom Coughlin. However, hesitation early in the game led to late-game mistakes that gave the game to New England. Specifically, the Jags chose to end out the half by taking quarterback kneels, instead of trying to get some quick points. Jacksonville had plenty of time to get the job done. Ultimately, it was that complacency that led to their US sportsbook demise.

The above listed odds hail from MyBookie.ag, a fan favorite when it comes to Super Bowl betting. MyBookie.ag sportsbook is known for offering great NFL action throughout the season, but they always take it to the next level for the Super Bowl. Feel free to check out sportsbook review on them to get an in depth look. 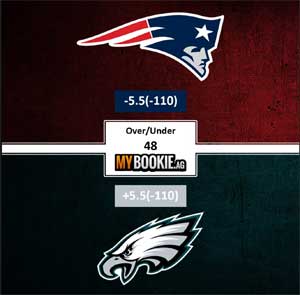