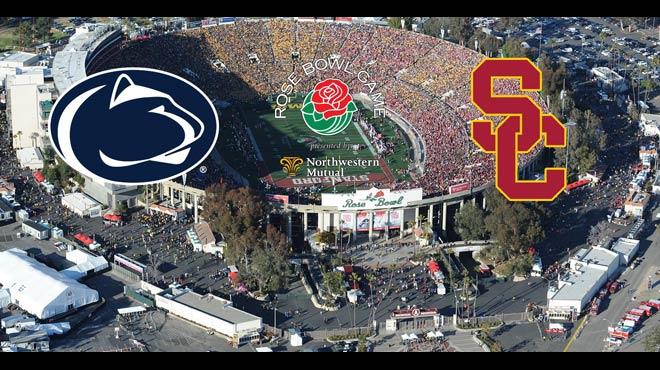 It is a matchup of Top 10 teams in the Rose Bowl on Monday, January 2nd as the 9th-ranked USC Trojans take on the 5th-ranked Penn State Nittany Lions. The Trojans closed out the regular sportsbook betting season as one of the hottest teams in the country winning their last 8 games to finish 9-3 while the Nittany Lions won the Big Ten and finished 11-2. Let’s look at the matchup and Rose Bowl picks.

The Trojans take on the Nittany Lions in the Rose Bowl in Pasadena, California on Monday, January 2nd with a start time of 5 pm Eastern on ESPN.

The Trojans have won eight straight sports betting games since starting the season 1-3. They beat Colorado and Washington along the way and won their last six games by double-digits. Quarterback Sam Darnold has been excellent since becoming the starter, throwing for 26 TD touchdowns. The Trojans also have Ronald Jones II who ran for over 1,000 yards this season.

USC averaged about 33 points per game while allowing 22 per contest. They went 8-4 ATS with 9 of their 12 games this season going under the total.

Penn State comes in having won their last nine games including the Big Ten title game. They beat Ohio State this sportsbook betting season but still got left out of the College Football Playoff. The Nittany Lions were led by Trace McSorley who set single-season school records with 3,360 yards and 25 touchdown passes this season. Penn State also has Saquon Barkley who was the Big Ten Offensive Player of the Year.

The Nittany Lions averaged about 37 points per game while allowing about 23 per contest. They went 9-3-1 ATS with ten of their 13 games going over the total.

This game could come down to just how well USC is able to stop the run. They were second in the Pac-12 in yards per carry allowed.

Both of these teams have prolific offenses so we’ll look for a high scoring game that goes over the total at the best betting websites like MyBookie Sportsbook.