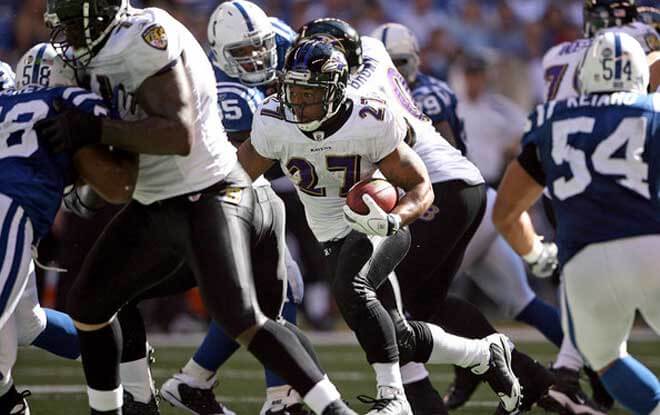 After a wild weekend of NFL betting surprises, US sportsbooks are ready to make up for any accounted losses. With the week’s Monday Night Football action in the bag, gambling websites and players alike will shift their attention to this week’s Saturday night matchup. Later on this week we’ll witness the Baltimore Ravens open up their home to the Indianapolis Colts. Neither team has had the season they were hoping for, but there are still betting opportunities to be taken advantage of. How heavily will NFL betting sites favor the Ravens over the Colts this Saturday?

The Colts have slumped their way to a 3-11 record this season. With that pitiful record, the Colts find themselves ranked dead last in the AFC South. An injury to Andrew Luck was at the center of what sent Indianapolis down this abysmal path. Luck has been heralded as one of the better quarterbacks in this league, and it’s a shame that we haven’t seen him out there this season. Nevertheless, Indianapolis’ struggles pave the way to an early 1st round draft pick this season. With that in mind, the Colts might actually be better off keeping their current 5-game losing streak alive and well. After all, the Colts don’t have much of a chance of upsetting the Ravens this upcoming Saturday night.

There’s not much hope backing the Colts straight up. Or on the money line. Or on the over/under line as well. In fact, there’s no reason to back Indy in this matchup. Additionally, there’s not much value in taking the Ravens on the money line. However, considering that Baltimore is 8-5-1 against the spread this season, fans might want to take the Ravens to cover that 13-point prediction.

The Ravens fly into this Week 16 pairing flashing an 8-6 record that ranks Baltimore 2nd in the AFC North. Earlier this season, Baltimore suffered a string of losses that led most bettors to believe they had no chance of making the playoffs in 2017. However, the Ravens were able to overcome their inconsistency by posting a 4-1 record through the last 5 weeks of the season. In fact, that brilliant performance has opened the door on a Ravens’ playoff berth. A win over the lowly Colts this weekend would certainly help the Ravens out in the endeavor. However, the 7th-seeded Ravens will need a couple of favors if they are to earn a Wild Card Berth.

Unquestionably, the Ravens have the statistical advantage. Baltimore has one of the NFL’s best defenses as they’re only allotting 18.3 points per game. For comparison, the Colts are allowing a whopping 26.3 each weekend. Offensively things are just as staggered. Indianapolis is struggling to score 16.1 points in their matchups while the Ravens usually put up around 24.6. It would be unheard of for the Colts to overcome these differences this weekend and the money line absolutely reflects that. Perhaps if Indy had Luck under center they would have better luck against the Raven. But in the absence of a dominant threat at the quarterback position, the Colts don’t stand a US sportsbook chance against Joe Flacco and the Ravens.