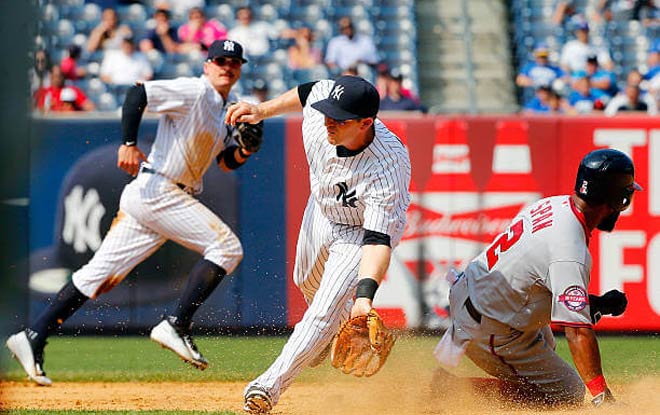 Sportsbooks for US players favor the New York Yankees over the Washington Nationals in the opening game of the 2020 MLB season. The season was originally slated to start on March 26. However, the current pandemic in North America caused Major League Baseball to announce the cancellation of the remainder of spring training games. And that it would delay the start of the regular season by at least two weeks.

A few days later, MLB announced the season would be postponed indefinitely. In this, it followed recommendations from the CDC to restrict events of more than 50 people for eight weeks. This is the first time MLB games have been put on hold since the 2001 season. On that occasion, the season was paused for over a week after the September 11 attacks. On June 22, MLB owners voted for implementing a 60-game season, reduced from the usual 162 games.

The Yanks are the favorites according to the best online sportsbooks. Following a 9–1 win over the Angels at home on September 19, 2019. The Yankees clinched the American League East Division for the first time since 2012. They opened the playoffs with a sweep of the Minnesota Twins in the Division Series. They were eliminated in the American League Championship Series by the Houston Astros in six games. This signaled the first calendar decade since the 1910s that the Yankees failed to make a single World Series appearance.

The Yankees started their training camp off on the wrong foot. Pitcher Masahiro Tanaka was hit square in the noggin by a ball he had previously thrown at batter Giancarlo Stanton. Talk about being hoisted by your own petard. Stanton’s exit velocity reached 120 mph early last season. It’s safe to say Tanaka never even knew what hit him. He was taken to New York-Presbyterian Hospital for further evaluation. On the plus side, his concussion-like symptoms had improved later on. But “It’s hard not to wonder if the already fragile slugger will need time to shake off the awful accident that started this season,” writes NJ. com.

The Nats are the underdog per sportsbooks for US players. The Washington team hasn’t exactly gotten off to an auspicious start either. Two of their players have tested positive for COVID-19, manager Davey Martinez said. Martinez did not say who the players are. He just said the positive tests resulted from testing done on July 1 during the team’s initial intake testing. The players have not returned to the park since. The Nationals are also expecting more results after 58 players took intake tests.

There remain outstanding test results for Latin American players who arrived late to summer camp. “Everybody assumed that everybody [that] got in got tested on Wednesday,” Martinez said. “That wasn’t the case for us. We still got guys out there that came in late and are still waiting on the results. I think being — this weekend, things were a little tough because it was a holiday weekend. So hopefully we’ll get all these results tomorrow and guys will start trickling in and get ready to work out.

“As we all know, I’m definitely at a little bit of a risk, but I’m doing everything I can to stay healthy. Washing my hands 47 times a day. Wear my mask everywhere. Leave here with gloves on. Will do everything to stay healthy. The biggest part of that is not to get anybody else sick, in case I do come up with it. Don’t want to get anybody sick. I worry about that more than I worry about me getting sick. I just want to make sure I’m healthy and everybody else stays healthy.”

This is a championship-or-bust season for the Yanks, and in particular for manager Aaron Boone. It’s important for them to hit the ground running. Based on that, users of sportsbooks for US players should take the Bombers over the Nats.