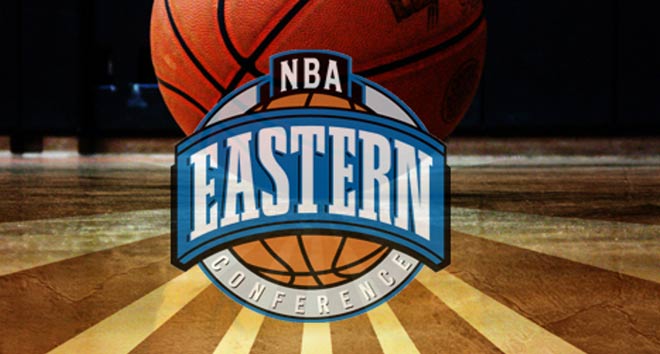 U.S Sportsbooks continue grinding out odds even though the NBA is like Rachel and Ross – i.e. on a break. Therefore, let’s have a look-see at the favorites to win the Eastern Conference; in other words, the current eight postseason hopefuls.

The Cavs entered the 2016-17 betting season as the defending NBA champions for the first time in the history of the team, and lead the Central division with a 39-16 record. As is par for the course for Cleveland, Kevin Love’s Labour’s Lost. The Cavs are reportedly interested in Larry Sanders – nope, not the late Garry Shandling – as Love’s replacement.

The Celtics lead the Atlantic Division and are second in the conference three games behind the Cavs. Boston has been at the center of a myriad trade rumors, for instance concerning the Bulls’ Jimmy Butler. But the Celtics appear to be content and were in fact not interested in DeMarcus Cousins, as had been reported.

This time last season the Wizards were 23-28 and ended up missing the playoffs. Randy Wittman was out, Scott Brooks came in and the Wizards lead the Southeast division and are third in the conference. As a matter of fact, the Wizards have improved so much that there are those who believe that they deserve a D-League team.

The Raptors closed the first half of the season on a pronounced downturn and while they are still a playoff team – and will most probably remain so – they’re no longer sportsbooks favorites to win the Atlantic division, let alone the conference. In order to improve their chances the Raptors acquired Serge Ibaka from the Magic in exchange for Terrence Ross and a future first-round draft pick.

For the Atlanta Hawks it’s a case of the “the more things change the more they stay the same.” The Hawks brought in hometown boy Dwight Howard to replace Al Horford and dealt Kyle Korver away, but are projected to finish with the same record as last season. however, according to Jeff Schultz of the Atlanta Journal-Constitution, the Hawks should not wait till the end of the season and start rebuilding the team before the trade deadline.

The Pacers went into the mid season break in the midst of a six-game losing streak after posting seven wins in a row. Indiana’s offense tends to boil down to standing around waiting for whoever the player has the ball to do something – and that player more often than not is Paul George. And he “can’t do everything” like he told the Indy Star’s Gregg Doyel.

The Bulls are third in the Central division and seventh in the conference, and while there are reasons to be optimistic about their chances to reach the postseason, they do have a few kinks to iron out, such as three-point shooting the young players’ inconsistency.

The Pistons are fourth in the Central division have the worst sportsbooks odds of winning the conference out of these eight teams.