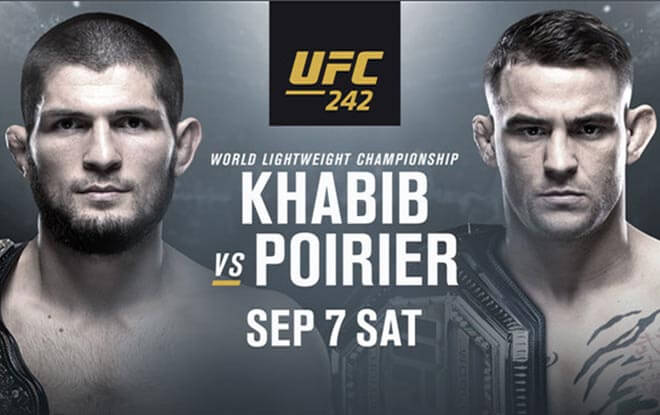 Khabib Nurmagomedov (-380) is the favorites over Dustin Poirier (+315), as the online betting USA spread goes for the UFC 242 Light Heavyweight Championship match on September 7th at The Arena, Yas Island in Abu Dhabi, United Arab Emirates.

The incumbent was last seen in an Octagon making Conor McGregor cry uncle. Nurmie retained the title at UFC 229 on October 6, 2018 in Las Vegas. He had entered the bout as a -160/-165 favorite, according to most of the best online sportsbooks. The Eagle made Mac tap out to a neck crank at 3:03 of the fourth round. And then we had a post-finish angle, as pro wrestling aficionados might say. After the fight, two of Nurmagomedov’s cornermen, Zubaira Tukhugov and Esed Emiragaev, gave Conor a heel beatdown. Even Khabib’s cousin got involved. Who booked that crap? Dusty Rhodes’s ghost? The long and short of it is that Nurmie was fined and suspended for ninth months. Ninth months might elapse regardless between a mixed martial artist’s last and next appearance. So it was no skin off Khabib’s nose.

Okay, so the ending of UFC 229 set up a Con vs. Khab rematch. In the meantime, though, the champ must face Poirier. The online betting USA odds favor Nurmie, but are the odds taking into account a possible Connor run-in? Because Khabib certainly is. “It will be more difficult to leave Abu Dhabi than New York,” Nurmagomedov said. “If [McGregor] plans to come, he should sit and watch the fights because it will be impossible to pull any of his underhanded tricks there. ‘Abu Dhabi is no place for show-offs. Let him come if he plans to come, but his shenanigans won’t work there.” Shenanigans, I say! DTA, Nurmie; beware decoys wearing Conor masks. In fact, Khabib may just picture Mac’s head on Poirier’s body and follow the same tactic. “I’m going to wrestle with him all night, make him tired and make him tap. This is my plan,” he said.

In another gimmick stolen from wrestling, this will be a champion vs. champion match. Dustin won the interim Lightweight Championship at UFC 236 on April 13 in Atlanta, Georgia. The Diamond beat Max Holloway by unanimous decision after the full five rounds. Wait, The Diamond? Is that a Screech reference? Anyway, Poirier thus became the umpteenth interim champion in UFC history. Reminds me of the time Joe Frazier tried to console Homer after the latter lost his couch. “You lost the couch. I lost the heavyweight championship,” Joe said. “Heavyweight championship…. There’s three of those. That couch was one of a kind,” Homer replied. I think even I was a UFC interim champion at some point. Don’t tell Dustin, though.

“This is real, I’m a world champion,” Poirier said. “As is he. This is a super fight to me. That’s how I feel, that’s what this feels like to me. We’re going to a sold-out arena they’re building as we speak in Abu Dhabi, the middle of the desert, and princes and sheiks will be there. It’s crazy. It’s a Rocky movie.” Yep, you’re a world champion. And James Cameron is the king of the world!

Poor Khabib. Maxim Dadashev’s death has made him “hate this sport in which we beat each other.” He will continue, however, to “maul people.” Well, you know, it’s like Carl Sandburg said. Life is like an onion. You peel it off one layer at a time, and sometimes you weep. So Nurmie is a two-faced hypocrite, but Screech is completely delusional. All things considered, online betting USA fans should back the real champion. Sorry Dustin.