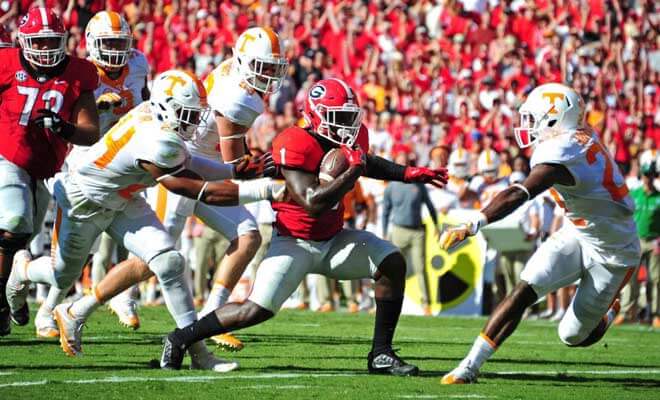 The Georgia Bulldogs are 20-point road favorites over the Vanderbilt Commodores, as the US online sports betting spread goes for the NCAA football game on August 31 at 6:30 CT Vanderbilt Stadium in Nashville, Tennessee.

The Bulldogs finished last season 11-3 (7-1 in SEC play) SU and, according to the best online sportsbooks, 8-6 ATS. UGA won the SEC East Division but lost the conference championship game 28-35 to Alabama as 12-point dogs. Georgia also lost the Sugar Bowl 21-28 to Texas as, per the US online sports betting spread, 13.5-point chalk.

The Bulldogs deadly on the ground, averaging 238.8 rushing yards per game (No. 16). D’Andre Swift lived up to his last name and recorded 1049 rushing yards with 10 TDs. And Elijah Holyfield added 1018 yards and seven TDs. It the second straight season that Georgia had two 1,000-yard running backs. Whether this occurs a third straight year, it will not be these two, as the Carolina Panthers drafted Holyfield. The pass game took a backseat to the run game (a No. 72-ranking 226.1 passing yards per game). Nonetheless, starting QB Jake ‘Ethan’ Fromm still managed to finish the year with 2,761 passing yards and 30 passing touchdowns.

In addition to, or rather subtraction of, Holyfield, UGA lost Fromm’s favorite target to the NFL draft. Riley Ridley, who led the school with 43 catches and nine receiving TDs, has since joined the Chicago Bears. However, Fromm is confident someone will step up in Ridley’s stead. “I don’t want to put added pressure on guys but Matt Landers, he has done an incredible job,” Fromm said. “I think he’s ready to take that step. He’s a guy who has kind of been a work in progress for a while. I really think he’s ready to take that step. He had a great spring. He’s had a great summer so far. He’s coming in, he’s doing extra, he’s doing all the right things. I’m looking for big things out of him and hopefully he can do well.”

Vandy went 6-7 (3-5 in SEC play) SU and 8-5 ATS in 2018. The Commodores lost the Texas Bowl 38-45 to Baylor though the US online sports betting spread favored them by 4.5 points. Vanderbilt was nothing special on either side of the ball. And with Jason Tarver still as DC, we may not see an improvement on defense. On the other hand, head coach Derek Mason did promote Gerry Gdowski from QBs coach to offensive coordinator. This is not Gdowski’s first rodeo as OC. As a matter of fact, let’s just say he’s been thrown off the bull a few times in the past. All things considered, we may not see much of an improvement on offense either. Or may we?

I think those last words sum it all up pretty well. Almost as well as if I had written them myself. Take Georgia and the points.