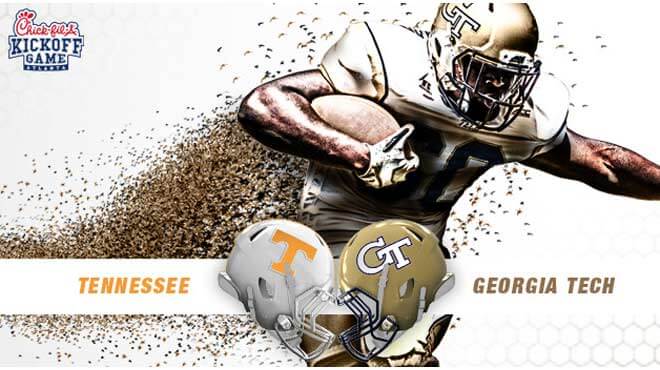 USA sportsbooks are starting to liven up as the 2017 college football betting season is officially under way. Few betting lines can compete with the raw popularity of the NCAA, that some would argue even eclipses that of NFL betting. While that may or may not be true, one thing that is beyond debate is the lucrative action available on the Monday night football contest of the season. One which pits the Tennessee Volunteers against the Georgia Tech Yellow Jackets. Let’s take a look at what top sportsbooks have to say about this Week 1 matchup.

The above listed odds hail from MyBookie, one of best college football betting bookmakers on the web with an outstanding reputation. MyBookie has great sign up bonuses to incentivize new bettors as well as jaw-dropping reload bonuses to keep you coming for more.

After finishing 3-9 in 2015, Georgia Tech knew they had a bit of rebuilding to do. Fortunately, the Yellow Jackets were able to just that as they finished the 2016 season with a 9-4 record (4-4 in ACC play) that allowed the program to finish 5th in the Coastal Division. Granted, the Yellow Jackets could have performed much better in conference play, but the fact that they were able to win 6 more games than they had the year before is something to be commended. The NCAA shared this sentiment as they invited Georgia Tech to the TaxSlayer Bowl, pitting them against the Kentucky Wildcats. The Yellow Jackets would go on to finish the season on a high note as they pummeled the Wildcats 33-18, riding out the season on a 4 game winning streak.

USA Sportsbook Picks to Make: Looking over the odds MyBookie has available, it’s clear that this is one contest worth betting on. Georgia Tech comes into this matchup unranked but online sportsbooks still feel like they can give Tennessee a hard time – judging by the odds on the money line. However, fans should feel better about picking the Volunteers, since they have a higher national recognition. Ultimately, the 3-point spread seems like the best option to take.