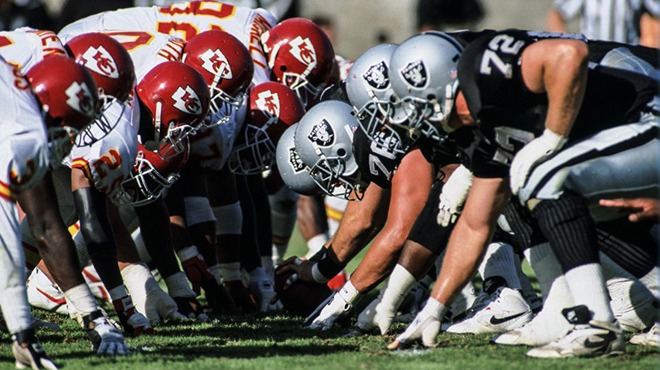 The best NFL sportsbooks have a great Sunday Night Football game in Week 11. The Super Bowl faves Kansas City Chiefs face off against their AFC West foes the Las Vegas Raiders. The Chiefs look to get back at Vegas for their only loss this season. Meanwhile the Raiders will look for their fourth straight win even though they are seven-point home underdogs at the best online sportsbooks.

Patrick Mahomes is completing 66.9% of his passes for 2,687 yards, 25 TDs and one pick. Mahomes has nine touchdown passes in his past two games. Travis Kelce and Tyreek Hill have a total of 1,419 receiving yards and 15 touchdowns. Mecole Hardman has 25 recs.

Derek Carr is completing 69.3% of his passes for 2,156 yards, 16 TDs and two picks. Carr has two or more TD passes in six of his past eight games. Darren Waller and Hunter Renfrow have a total of 830 receiving yards and six TDs. Nelson Agholor has 18 recs.

When these two teams clashed at Arrowhead Stadium in Week 5, the Raiders got away with a 40-32 upset win as 11-point underdogs. But that was just the first Raiders win against the Chiefs in the last six encounters. Kansas City had won the other five games by an average score of 34-14.

The Raiders pass defense is 25th in the NFL. It allows 264.9 yards per game. That number swells up to 300.5 ypg at home. Patrick Mahomes and the Chiefs’ aerial attack can exploit that weakness. And head coach Andy Reid can use the extra week of preparation to make sure Kansas City’s defense plays better than it did in Week 5. The Raiders are 2-5 ATS in their last seven games at home. The Chiefs are 9-1 ATS in their prior 10 games against teams with a winning record. Take KC to win and cover.

The total for this game is the highest of the week, but there is reason to consider the under. The Chiefs gave up a staggering 490 yards and 40 points to Vegas in Week 5. However, they’ve actually been very good on defense the rest of the season. In their other eight contests, Kansas City has held opponents to 337.1 yards and 17.9 points per game. The Raiders should still manage to pick up rushing yards thanks to Josh Jacobs and a porous Chiefs run defense. But don’t expect Derek Carr to have another pic-nic through the air. Take the under.