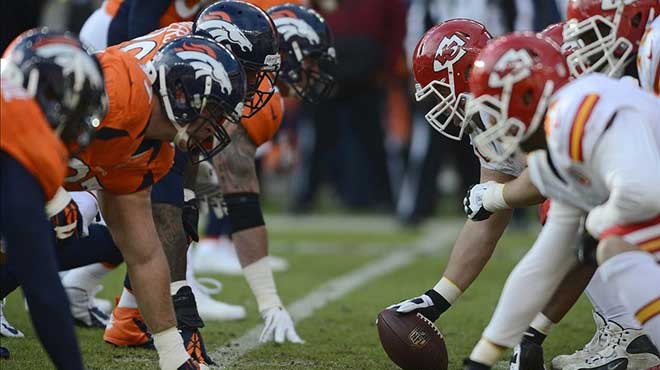 After completing Week 8’s NFL betting action for the weekend, US online sportsbook players are ready to wager on this week’s Monday Night Football matchup. This week, bettors will have to wager on an AFC West matchup pitting the top two teams in the division against one another; the Kansas City Chiefs will host the Denver Broncos. Considering both teams rank in the upper echelons of the NFL elite, there’s no question that this contest will turn out to be one of the best matchups from Week 8. Let’s take a look at what NFL gambling sites are predicting for this Monday night matchup.

The Broncos ride into this Week 8 matchup flashing a 3-3 record that ranks the franchise 2nd in the AFC West, 2 games behind their Monday night opponent. Denver has hit a bit of a rough patch recently and comes into this game riding a 2 game losing streak after suffering consecutive losses to the New York Giants and Los Angeles Chargers. With the Broncos’ defense holding their opponent to under 24 points in their last two contests; it’s safe to say that the majority of the blame can be pinned on Denver’s O – which is unquestionably the weak link of this team. US online sportsbooks are pegging the Broncos as the underdogs in this matchup by a significant margin. However, the Chiefs are coming off a disappointing loss themselves and there’s no guarantee they’ll come out on top.

Defensively, there’s no question that the Broncos are the better team. Denver ranks 11th in points allowed per game, has the league’s No. 1 total defense, 6th best pass defense, and 2nd best run defense. If that top-ranked run defense can force the Chiefs to turn to Alex Smith by neutralizing KC’s running game, the Broncos might just be able to pull off the upset. But, there’s no denying that the Chiefs offense is much better than the Broncos.

The Chiefs arch into this Monday night matchup sporting a 5-2 record that ranks them 1st in the division. Kansas City posted an impressive undefeated streak to start this year’s season off, winning the first 5 games of the year. However, since then, the Chiefs have lost two in a row. Kansas City’s first loss of the season came against the Pittsburgh Steelers 19-13 before losing a close divisional matchup 30-31 to the Oakland Raiders. The Chiefs need a rebound in order to remain the top dog in the AFC, a position the Patriots are starting to take for themselves. Nonetheless, the Broncos aren’t exactly the team you want to face when you’re looking for a rebound.

Good sportsbook players should take the Chiefs in this contest. Kansas City is the better team, starting with their offense. Alex Smith isn’t the best quarterback in the NFL, but he’s plenty good enough to lead the Chiefs’ offense considering the pieces that he’s surrounded by. Kareem Hunt is the best player to come out of this past draft and Tyreek Hill is putting together a Pro Bowl season for himself. These pieces allow the pressure to come off Smith’s shoulders and allow him to play at a higher level than would normally be allowed. Kansas City’s defense has been plenty good enough this year to keep their team in position to win football games.