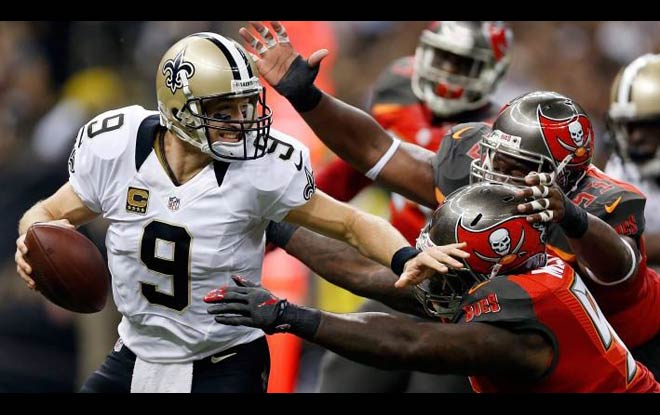 Can Ryan Fitzpatrick save the Tampa Bay Buccaneers? The best NFL gambling sites know that only Breesus saves. Tampa Bay’s starting QB Jameis Winston has been suspended for the first three regular season games. Like Guy Pierce said of Kevin Spacey, Jameis is a very handsy guy. As a result, Fitzy will be thrust into the spotlight. Starting with the season opener against the Saints. Speaking of which, Drew Brees. Breesus has aged like a fine wine (maybe a nice Chianti. With some fava beans). Wine which was probably water before turned it into. With the same sleight of hand to which he has us accustomed on the gridiron.

Fitzpatrick played six games in 2017. More importantly, he started three of those games while Winston was injured. Fitz went 2-1 in those three games. The Bucs beat the New York Jets and the Miami Dolphins. Not exactly stiff competition. On the other hand, they lost 20-34 to the Atlanta Falcons, which are comparable to the Saints. The Bucs did manage to cover the spread against the Falcons. But it was seven points, not nine-and-a-half.

Fitzpatrick will have his hands full but he’s been doing his homework, syncing up with his receiving corps. “In terms of timing, there’s guys that are easier to throw to than others and so getting the reps in practice in some of those preseason games, those’ll be good live reps to get with some of the receivers just to get the timing down,” Fitzpatrick said.

And speaking of getting the timing right with receivers, Drew Brees. Breesus still spends 30 minutes following practice synchronizing passing routes with his receivers and backs, as is his custom. As a matter of fact, Brees’s routine remains as hectic even at 39 years of age. “I’m still having a lot of fun,” he said. “Every year is a new year – it’s a new challenge, a new team. There’s always new dynamics and new circumstances and new guys that you’re trying to get used to, and just that same level of excitement and anticipation for what we can be. This is where we build it. There is where we establish our identity. And I’m just excited to get started.”

All of which is to say that Brees is not missing a beat. And that gives the best NFL gambling sites plenty of reason to favor the Saints. Breesus has thrown 4000+ yards per season each season for the past 12 years. That includes four seasons with 5000+ passing yards. On the other hand, he did have just 23 TD passes in 2017. That was his first season with fewer than 30 since 2007. Then again, it was still just three fewer than Winston and Fitzpatrick combined.

Free Pick: The Bucs would struggle against the Saints even with Winston under center. As it is, even the ATS win seems unlikely.