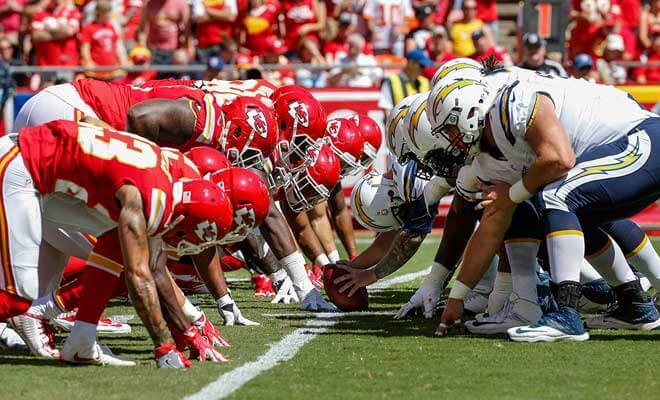 As the NFL betting season progresses, the stakes get higher and higher which, ultimately, lead to a better product on the field. Furthermore, games that are more competitive and have more on the line propel a larger amount of US sportsbook players to bet. One of the most competitive matchups of this weekend’s lineup has to be the AFC West pairing between the Kansas City Chiefs and the Los Angeles Chargers. Both teams are vying to lock of the division and the matchup will certainly develop into a shootout. Let’s take a look at what are some of the best sportsbook bonus to rack up on this weekend’s rivalry.

The Chiefs leap into this weekend’s AFC West matchup with a 7-6 record that keeps them in contention for a divisional title. It’s been a tale of two cities for this year’s Kansas City Chiefs. For the first half of the season, the Chiefs were an indomitable force heralded by Kareem Hunt on the ground and Tyreek Hill as well as Alex Smith through the air. But now we’re seeing something else out of KC. Instead of pummeling their opponents week in and week out, they’re losing close games against some of the worst teams in the league. They say confidence can be just as deadly as criticism and the 2017 Chiefs are a perfect example of that. Luckily for Kansas City, they can still win the division. But they’ll need to overcome the hungry Chargers, a team that keeps getting better each US sportsbook betting week.

The Chargers bolt into this Saturday night pairing with a 7-6 record. The AFC West has come down to a showdown between these two. The Raiders are still technically in it, but we haven’t seen anything out of Oakland this past month to believe that they’ll make the playoffs. The opposite is true for Los Angeles who enters this weekend’s matchup riding a 4-game winning streak. In fact, it seems like the latest sportsbook news are riddled with positive things regarding the Chargers. Overall, there’s not much use denying that the Chargers are more put-together than Kansas City.

Both teams sport tremendous offenses. The Chiefs rank 6th in scoring, 6th in total offense, 8th in passing and 12th on the ground. For comparison, the Chargers rank 15th in the NFL in scoring, 5th in total offense, 3rd in passing and 24th in rushing. Kansas City has Los Angeles beat in scoring and running, but it’s unlikely that that will be enough to win the division this Saturday. Especially since Kansas City will be going up against a defense that ranks 2nd in points allowed, 10th in total yards, 3rd against the pass and 29th against the run. Unless Kareem Hunt is able to piece together some miraculous, Hall of Fame performance, bettors can expect this matchup to go down to the wire.