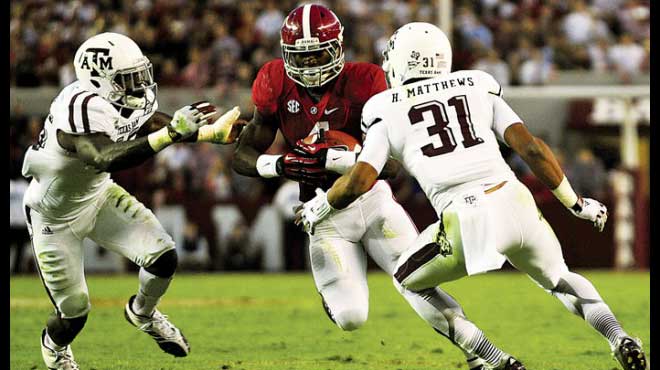 Let’s have a look at the best USA betting sites’ odds and pick for Alabama at Tennessee, with kickoff scheduled for Saturday, October 24 at 3:30 ET in Knoxville.

Alabama vs Tennessee U NCAAF Betting Odds by MyBookie.ag

The Tide is the road chalk according to the best online sportsbooks. Georgia has one of the best defenses in the NCAA. Yet Bama piled up 41 points on them. What can Tennessee do to slow down Mac Jones?

Jones is doing his damndest to make people forget about the Samoan Bulldozer Tua Tagovailoa. The senior signal-caller is completing almost 80% of his passes for 1,518 yards with 12 TDs and two picks. He has, second to none, the best receiving unit to throw the ball to in the country. DeVonta Smith, Jaylen Waddle and John Metchie III. And he has Najee Harris to boot in the backfield. Harris ran roughshod through the Dawgs’ defense. He now averages 6.0 yards per carry with 11 TDs on the ground.

The Alabama Crimson Tide will aim to improve their 4-0 record after a 41-24 routing of Georgia. Mac Jones has passed for 1,518 yards, 12 touchdowns and two interceptions on 78.3% passing. Najee Harris has rushed for 499 yards and 11 TDs. Brian Robinson Jr. has 174 rushing yards. Jaylen Waddle has 557 receiving yards on 25 receptions with four touchdowns. DeVonta Smith has another four touchdowns, with 38 grabs for 483 yards. John Metchie III has 14 recs for 348 yards and three TDs.

The Vols are the home dogs per the best USA betting sites. Tennessee was stumped 34-7 by Kentucky, a good, though not great, program. Prior to that they were dispatched by Georgia 44-21. The Vols’ offense, and Jarrett Guarantano in particular, had trouble in those games facing stiff competition.

The Tennessee Volunteers will try to bounce back from straight losses following a 34-7 loss to Kentucky. That plummeted the Vols back to .500 at 2-2. Jarrett Guarantano has passed for 752 yards, four touchdowns and three interceptions on 63.1% passing. Eric Gray has a team-best 298 rushing yards and a couple of TDs.

Ty Chandler has 238 rushing yards with two TDs. Josh Palmer has 15 receptions for 238 yards and three TDs. Brandon Johnson and Eric Gray each have 13 catches and 100-plus receiving yards. Henry To’o To’o has a team-best 31 total tackles, 15 solo tackles and one interception. Deandre Johnson has a team-best 3.5 sacks.

Alabama vs. Tennessee U NCAAF Pick

The forecast calls for scattered thunderstorms as well as a 30% chance of rain during the game. Temperatures should be in the mid-70s. There will be minimal wind. We can expect Alabama to score almost at will and cover the spread set by the best USA betting sites. However, getting points on the board could be a little harder for the Vols.

Tennessee has scored 28 points in the last two games. it became evident that Guarantano had problems making decisions. He threw three interceptions and averaged just 4.5 yards per attempt. That dog won’t hunt, even against an Alabama defense that’s not airtight. Tennessee’s offense is 67th in total yards and scores just 23.8 points per game. The Vols just haven’t been successful against Nick Saban over the years.

Saban has never lost to Tennessee as Bama head coach. The Vols have averaged 13 points per game in the last five years. And while the over is 6-2 in the last eight meetings, this is the highest number in that period. Last season was the first time in those eight matches that the total was above 60, and it fell under that figure. It should also remain under this time.