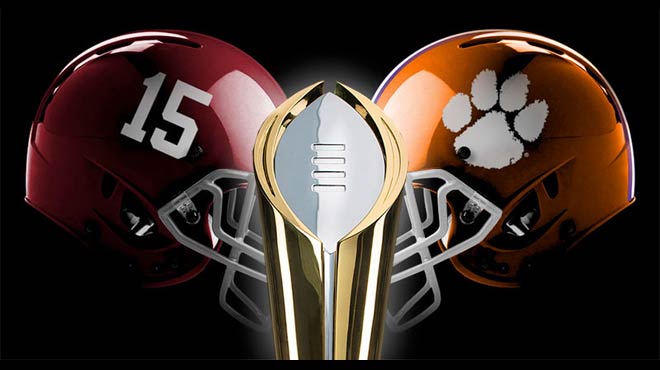 Last college football betting season, the biggest sportsbooks had to contend with championship lines for the Clemson vs. Alabama title game – for the second year in the row. Will we see the Tigers face off against the Crimson Tide for the 3rd year in a row? Or will history fail to repeat itself this time around?

This year’s title match pitted Clemson against Alabama for the second year in a row, giving NCAA betting fans an opportunity to witness a rematch of the 2016 championship game that left us all on the edge of our seats.

The Tigers, lead by Deshaun Watson, managed to avenge their 2016 loss by upsetting Alabama 35-31 this past January. Both games were for the record books, but as this season approaches fans have begun to wonder if a 3-peat is possible. Let’s find out what changes both programs have undergone, before going over what the biggest sportsbooks have to say about their chances.

Coming off a 14-1 season that saw the program win a national title, the Tigers have some pretty big shoes to fill. Most notably at the quarterback position, since Watson – the man most responsible for Clemson’s sportsbook upset, has will be strapping up for the Houston Texans this upcoming season.

Dabo Swinney will do his best to lead the Tigers in his 10th season with Clemson, and Swinney will be turning to Junior Kelly Bryant to lead his offense. Bryant has only thrown 9 passes in his first two seasons at Clemson, and the head coach best summed up our feelings when he said the following:

“Kelly’s going to be the guy for sure going into the spring, there’s no question. How’s he going to do? Well, we’re all going to find out.”

There’s not a whole lot of footage on Bryant but one thing is abundantly clear; his athleticism is beyond reproach. Bettors who feel confident that the Tigers can overcome the abrupt change at the quarterback position should check out MyBookie.ag, one of the best online sportsbooks who aren’t giving the Tigers that great of a shot – making a bet on Clemson all that more alluring.

The Crimson Tide enters the 2017 college football betting season as the sportsbook favorite to win the title. One thing Alabama does have going for them this upcoming season, is that they won’t have to contend with a change at the quarterback position. However, the Tide will have to deal with more than one loss on the defensive side of the ball.

A total of 10 defensive players have departed from Alabama, including defensive back Marlon Humphrey, defensive lineman Jonah Allen, and linebacker Reuben Foster – all of whom were selected in the first round.

Alabama dealt with a similar amount of defensive losses last year, at least in volume. But when it comes to talent, it might be another story.

Nevertheless, there will be a multitude of college football betting fans who feel confident that Nick Saban can lead the Tide to a respectable season, if not another title. Those who share that sentiment should check out InterTops.eu, who are currently offering some of the best sportsbook bonus – particularly sign up bonuses, on the web.