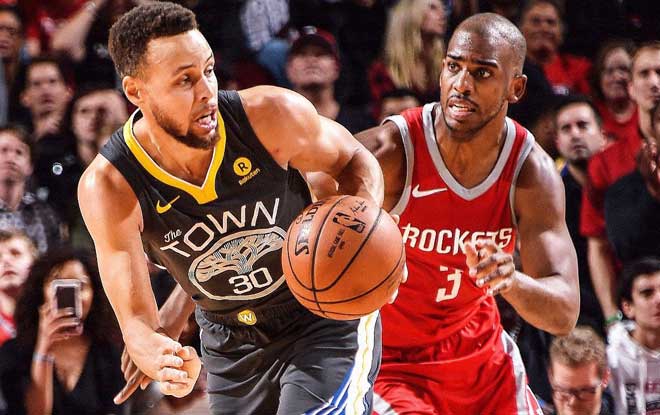 The Golden State Warriors vs. Houston Rockets series is what NBA playoff betting is all about; two teams going all out for a shot at NBA glory. On one side are the Warriors; a fine tuned scoring machine that is borderline unstoppable. On the other are the Rockets; the underdog that has enough grit to tackle down this goliath. Up next is Game 5, set to be held in Houston. What kind of matchup will NBA gambling websites predict? And what kind of bets should the biggest sportsbook bettors make?

Coming off a 92-95 home loss to the Rockets, Golden State needs a win lest they give Houston too much momentum. In Game 4, Stephen Curry had a last-second shot to try and force extra time. Although Curry may be the best shooter the NBA has seen, he failed to get the OT. What’s worse is that Golden State had built up a sizable lead over Houston in that matchup. This shows that the Warriors struggle to contain the Rockets’ momentum, which is even more concerning considering Golden State was playing at home in Game 4. What will Golden State do in Game 5 once the Rockets go off?

James Harden and Chris Paul are the catalyst for the Rockets’ success. Harden finished Game 4 with 30 points, 4 assists and 4 rebounds. Similarly, Paul finished the night with 27-points, 4 assists and 2 rebounds. Clearly the Warriors have to find a way to keep these two from hitting their groove. But considering that the Warriors are an offensive minded team, will they even be able to? It seems unlikely, especially on the road. In the end, a win tonight could propel Houston to an NBA Finals berth.

The above pictured odds hail from MyBookie sportsbook, one of the best and biggest sportsbooks to turn to during these NBA Western Conference Championship Series. MyBookie has some of the best odds on the market and are beyond committed to offering a high-level service. In addition to their odds, they have plenty of great sportsbook bonuses and tidbits to help you out. No doubt about it, MyBookie is one gambling website worth checking out for these NBA playoffs.

Best US Online Sportsbook Prediction: 122-118 Golden State. The Warriors take the lead with a road win over Houston.

Best Sportsbook Bet to Make: Taking either side straight up is a great option.