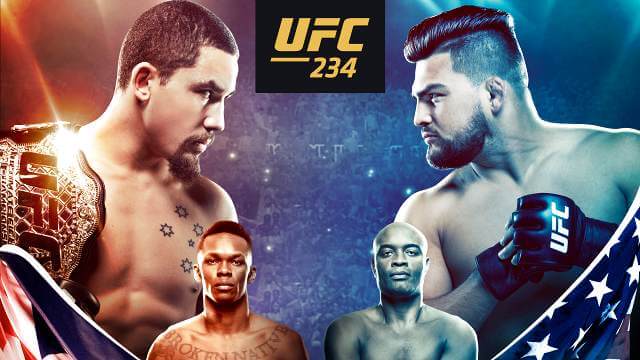 According to legal betting sites, Robert ‘The Grim Reaper Roper’ Whittaker is the favorite over Kelvin ‘The Kelvinator’ Gastelum. The best online sportsbooks favor the current, reigning and defending middleweight champion to defeat the challenger at UFC 234. Whittaker is 8-0 since his divisional debut. A win over Clint Hester (TKO, second round) at UFC Fight Night 65 on November 8, 2014 in Sidney, Australia. As it turns out, UFC 234 will also take place Down Under. Whittaker won the title from Yoel Romero in Las Vegas, Nevada. That was a unanimous decision after five rounds at UFC 213 on July 8, 2017. However, Bobby Knuckles has been more successful in his home country. As a matter of fact, Whittaker is 14-1 in Australia.

Gastelum is 5-3-(1) in his last nine last fights, per legal betting sites (3-1-(1) since returning to middleweight). That includes a no-contest in his UFC Night Fight 106 bout with Vitor Belfort. Gastelum originally won by TKO in Fortaleza, Brazil on March 11, 2017. However, the decision was overturned after Gastelum tested positive for a marihuana metabolite. His next fight was a submission loss to Chris Weidman. That occurred at UFC on Fox 25 in July 22, 2017 in Uniondale, New York. Gastelum has since defeated Mike Bisping and Ronaldo Souza. He KO’ed the Bisp in the first at UFC Fight Night 122 on November 25, 2017 in Rio de Janeiro. Gastelum then beat Souza by split decision at UFC 224 on May 12, 2018, also in Rio.

Pick: Whittaker has been the more constant fighter in the months preceding this bout. Additionally, he has a nigh-perfect record in Australia. The Reaper wins in the 3rd round by knockout to retain his championship.

The main card also includes Israel Adesanya vs. Anderson Silva. In which legal betting sites favor the Last Stylebender over the Spider. Adesanya is undefeated in 15 professional fights. Including a 4-0 record since joining Dana’s playground. Most recently, Adesanya TKO’ed Derek Brunson in the first round at UFC 230 on November 3, 2018 in New York City. While Adesanya is on the rise, the veteran Silva is on his way out. The only thing they have in common is both have defeated Brunson. The Spider beat Brunson by unanimous decision two years ago. That was a refreshing change following four losses and a no-contest in Silva’s previous fight bouts.

Pick: Silva gets KTFO in the first round. After which the Spider hopefully and mercifully retires.

And on the female side of things, we have ‘Hannah’ Montana De La Rosa vs. Nadia Kassem. De La Rosa has won her last two fights by submission. Her first two UFC fights to be more precise. She is tall – though neither plain nor Sarah – and her jab keeps opponents at arm’s length. And Montana does have a pretty long arm. On the other hand, she is not very powerful. De La Rosa is a submission artist and has yet to knock out one of her foes. Kassem is also new to UFC. She had a 4-0 record in the independent circuit before joining the big time. Her debut was a UD win over Alex Chambers at UFC Fight Night 121 on November 19, 2017 in Sidney, Australia. That broke a streak of four straight KO wins.

Pick: As said above, De La Rosa keeps her opponents at bay with her jabs. And if Kassem attempts to get close, she will make herself vulnerable to a takedown. In which case De La Rosa will win this one by submission. Say, in the third round.