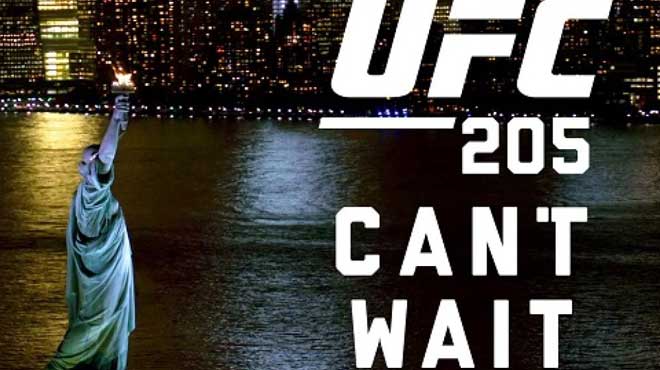 UFC 205: Alvarez vs. McGregor takes place on November 12th at Madison Square Garden in New York City with a stacked card of fights. There are three titles fights on a six-fight main card and there are seven fights on the preliminary card. Let’s look at UFC 205 odds with a focus on the main card and UFC picks.

This bout has Alvarez defending his lightweight title against current featherweight title holder McGregor. This is a matchup between the highly skilled Alvarez who does everything well against the flashy McGregor who is known for quick strikes. This fight may not last long as McGregor will be looking for a quick knockout.

I will go with McGregor to win this fight and also take the rounds under at the best sportsbooks.

Current welterweight champion Woodley will defend his title against Thompson. Woodley is 16-3 in his career while Thompson is 13-1. Thompson has beaten some really good fighters including Johny Hendricks and Robert Whittaker and he is getting a lot of respect from the oddsmakers as he is favored. Thompson really hasn’t beaten anyone of note other than Carlos Condit unless you give him credit for his split decision win over Gastelum.

I will take Thompson to get the win.

This will be the third title fight on the card with Jedrzejczyk defending her strawweight title. Both fighters come into this unbeaten. Jedrzejczyk has simply dominated in the UFC but she could get a test from Kowalkiewicz who will try and get a knockout.

This is a tough one to call so I will pass.

This is the first fight for Weidman since he lost at UFC 194 in December. He will be going against Romero who failed a drug test earlier this year. Both fighters have big time power so this one may not last long.

I will take Weidman and the rounds under at the best sports betting sites.

I will go over the rounds total when it is posted at top sportsbooks.

This will be the first fight for Tate since she lost to Nunes at UFC 200. He gets a bout against Pennington who is still trying to make a name for herself.

I will take Tate to get the win.