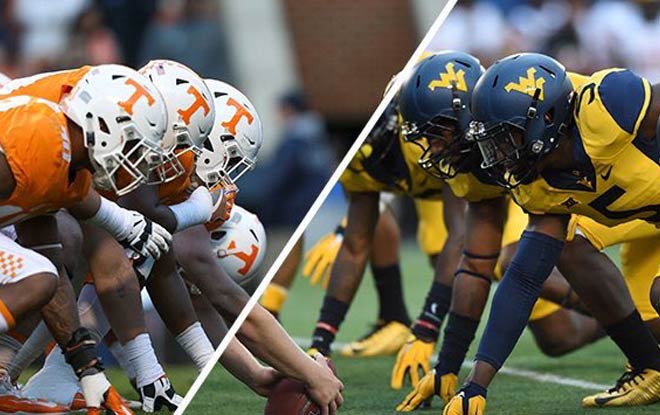 Legal gambling sites in USA favor the West Virginia Mountaineers by 10 points over the Tennessee Volunteers. This would be a somewhat shocking turn of events, had the 2017 season not taken place. And believe you me, the Vols would love to have last season stricken from the records. Especially because their own record sucked. UT cannot erase their 4-8 (0-8 in SEC play) record from the books, but they could and did banish former head coach Butch Jones. Like Vladimír Clementis in that Klement Gottwald photo, Jones has been long out of the picture. The Vols brought in first-timer Jeremy Pruitt, who will pop his head coaching cherry against the ‘Neers. Speaking of whom, WVU managed to scrape by with a winning record, 7-6 (5-4 in Big 12 play). All things considered, Tennessee versus West Virginia is a clash between the bad and the mediocre. Yay?

The Vols made many, many mistakes last year. It’s almost as if Jones coached them wrong on purpose as a practical joke. First of all, they allowed 29.1 games per game. That’s 9th in the SEC and 83rd in the country. Second, they had just 22 sacks. That’s 13th in the conference and 92nd in the nation. Third, they had a -0.25 turnover margin. That’s 10th in the SEC and 88th in the USA. Fourth, they ranked 12th in the SEC in time of possession. That’s rather good actually. If you’re an exorcist. And fifth, and worst of all, the Vols scored a measly 19.8 points per game. That ranked them last in the Southeast Conference, and 118th in the country. Out of 130 schools.

A defensive coach such as Pruitt can help UT improve some of those areas. Like putting more pressure on the opposing QBs. Or causing more turnovers. But their quarterback and offensive line are in no better situation than they were last season. And there seems to be little Pruitt can do, other than a compact with the devil, to fix that.

Unlike the Vols, the Mountaineers once again have certainty at quarterback. Starting QB Will Grier has not just recovered from surgery to heal a broken finger. He also decided to delay entering the NFL draft and return for a senior year. That great news for two reasons. First, Grier will have a college degree to fall back on if this football thing doesn’t pan out. And second, the ‘Neers will be able to squeeze one more season out of one of the best returning signal-callers. Grier has been listed on the Davey O’Brien Award Watch List, as well as several lists of potential Heisman Trophy winners. He passed for 3,490 yards and 34 touchdowns before bowing out in the second to last game of the regular season.

Our FREE Pick: The Volunteers will almost certainly have improved on defense. That may be good enough to remain within the 10-point spread. However, the returning Grier is bound to spoil Coach Pruitt’s debut.