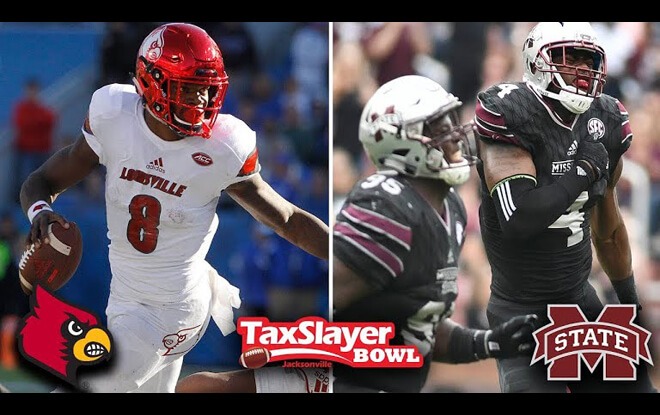 The Louisville Cardinals figure to have a huge edge at quarterback in the TaxSlayer Bowl against the Mississippi State Bulldogs. Both teams finished the regular season at 8-4, but Louisville will have last year’s Heisman winner Lamar Jackson running their offense, while the Bulldogs will be without Nick Fitzgerald. The Cardinals are listed as 6.5-point favorites in this game on Saturday, December 30 on ESPN.

The Cardinals feature last year’s Heisman Trophy winner Lamar Jackson who threw for 3,489 yards and 25 TDs and rushed for 1,443 yards and 17 TDs, while the Bulldogs have running back Aeris Williams who ran for 1,019 yards. Louisville averaged 39 points per game this season and gave up just 27 per contest. The Cardinals are excited and ready to go for this bowl game. “I’ve become so close to these guys, I’m excited to go back to Florida, and I’m not even from there,” Louisville running back Reggie Bonnafon said. “Being in Jacksonville, I’m looking forward to it. I know it’s going to be a great time.”

The Bulldogs will have to rely heavily on Williams, as they will be without starting quarterback Fitzgerald who dislocated his right ankle against Mississippi. The Bulldogs will be going with freshman Keytaon Thompson in the bowl game.

Fitzgerald threw for 1,782 yards with 15 touchdowns and 11 interceptions and rushed for 984 yards and 14 touchdowns. Thompson completed 13 of 27 passes for 195 yards, a touchdown and an interception this season. Mississippi State averaged 32 points per game this season, while giving up about 20 points per contest.

The Bulldogs have all kinds of issues for this game, as not only will they be without their starting quarterback, but they will not have their head coach, as Dan Mullen left for Florida. The Bulldogs hired Penn State offensive coordinator Joe Moorhead but he won’t take over until after the bowl game. Greg Knox who is the running backs coach and special teams coordinator will coach the bowl game.

Mississippi State will also have a new defensive coordinator, as Todd Grantham went with Mullen to Florida.

How can Mississippi State be focused for this game playing with a backup quarterback, an interim head coach and a new defensive coordinator? It seems very unlikely they can slow down Jackson and Louisville. We’ll lay the points and take the Cardinals at gambling websites like MyBookie.