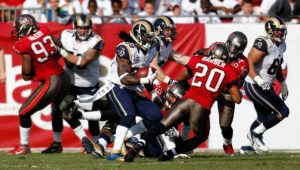 The team that everybody is talking about is the Tampa Bay Buccaneers, a very impressive stretch with seven-game losing streak against NFC West opponents.

With a little help from the New Orleans Saints loss in Week 14 the Buccaneers going to try to save a ticket to the NFL playoffs that are very very close.

Tampa Bay lost the last meeting against the Saints 24-17 at home, they do not cover the betting spread as -5.5-point favorites.

For St. Louis Rams this is not the best betting season, they are losing the last meetings and they are almost done for the rest of the season.

No matter what they have covered the last 4 games against the Buccaneers and the Rams will try to do that this Thursday Night.

The Rams won by some miracle 21-14 against the Lions at home and covered the betting spread of that match as +3-points’ underdog.

For all the fans that would like to bet on Thursday Night Football the line at the top sportsbooks opened as Buccaneers as 0-point favorites versus the Rams, and the total opened at 40.5; but now the line is moving very fast and the current line show us St. Louis Rams as -2 (-115) and the Over 41 (-110).

Since the line is moving too fast and changing a lot we recommend you to take your bets now, and you can do that at Topbet Sportsbook, where you can get 50% deposit bonus to bet on Thursday Night Football or any NFL game of the Week 15.