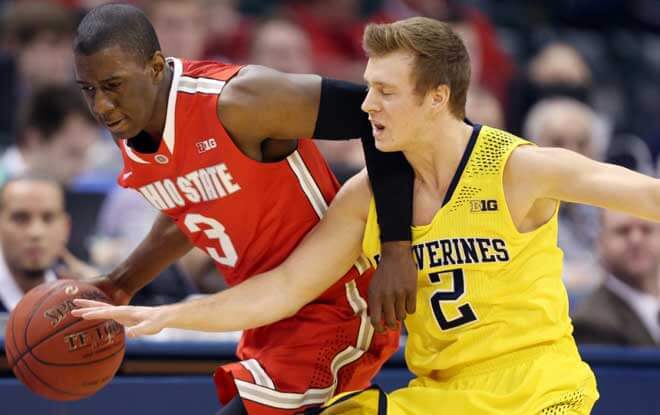 When Chris Holtmann took over as head coach of the Ohio State Buckeyes last summer expectations were small. It was hoped that the unexpected coaching change would stave off disaster for the slumping program. But Holtmann has made the most of his opportunity. Ohio State was picked for the bottom of the Big Ten standings. But the Buckeyes have defied College basketball wagering expectations as a major surprise. Ohio State leads the Big Ten Conference and has been profitable. Holtmann is looking at Big Ten Coach of the Year honors. Ohio State visits Michigan on Sunday.

The Ohio State Buckeyes have a College basketball wagering record of 22-5 straight up and 14-11 against the spread. They have come away with the cash in seven out of their last ten games. OSU has gone under the total in eight out of their last nine games. Junior forward Keita Bates Diop has been the difference maker for the Bucks. Diop leads the team with 19.9 points and nine rebounds per game. Holtmann has coaxed the maximum effort out of Ohio State. An impressive team ranking of 37th in the nation for scoring defense bears that out.

The Michigan Wolverines are 21-7 straight up and 15-10-1 against the spread. They have lost just five out of 14 home games against the odds. The Wolverines have gone under the total in ten of their home games. In their last seven games they have gotten the money five times. UM has gone under the total in six out of their last nine games. German forward Moritz Wagner leads Michigan with 14.6 points and 7.3 rebounds per game. Coach Jim Beilein has also built a strong defense. The Wolverines rank tenth best in the nation for points allowed. It is that defense that has made them a likely March Madness team.

Ohio State has earned rave sportsbook reviews in their head to head series with Michigan. The Buckeyes have gotten the cash in four out of their last five games against Michigan. Under the total paid out in four of those five games as well. At the Crisler Center however UM has fared much better. The Wolverines have paid out in four of their last six home games against OSU. Under the total has hit in three out of the last four meetings in this series at Crisler.

This is the final home game of the season for Michigan. The Wolverines will be fired up with a big crowd in their farewell game. The fact that their hated rivals are the opposition only adds to their incentive. Ohio State has caught many teams off guard this season. Michigan will be primed and ready for this College basketball wagering rivalry showdown. The tough Michigan defense should feed off the crowd. The Wolverines defense won’t take the day off in this one.

Michigan has the defense and motivational edge. They also have a strong record at home against Ohio State.