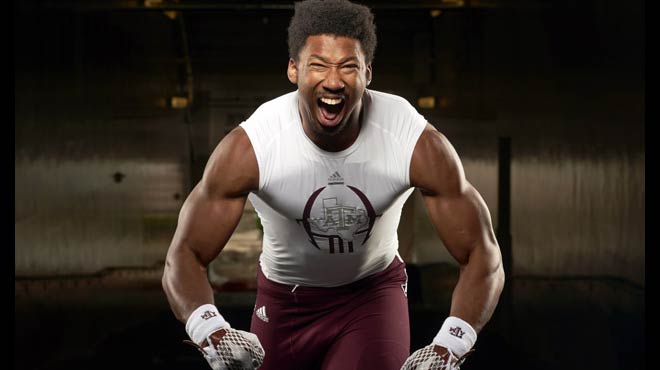 Defensive end Myles Garrett is the odds-on favorite at most sportsbooks to be the first overall pick in the 2017 NFL draft, followed by quarterback Mitch Trubisky.

Garrett committed to Texas A&M University in 2013 as the No. 2 prospect in the nation as well as the highest-rated defensive player ever signed by the Aggies. As a true freshman the following year, Garrett quickly broke Jadeveon Clowney’s sack. That had to hurt. Oh wait, that’s Jadeveon Clowney’s SEC freshman sack record of eight. The DE had his worse – comparatively speaking – year in 2016, failing to post double figures in sacks for the first time in his college career, and recording 26 fewer tackles than during his sophomore year. This downtick, which may be attributed to a high-ankle sprain that sidelined him for two games and limited him to third downs in a few other games, didn’t deter Garrett from declaring for the 2017 draft. In a way, 2016 ended that day – December 31, 2016.

Another defensive end, Thomas went from redshirting his freshman year, to an All Pac 12 honorable mention in 2015, to the first team All-Pac-12 the next year – picking up the Morris Trophy awarded to the best defensive linemen in the conference along the way. After two years in Stanford, the Chicago-born DE decided to declare (what alliteration!) for the 2017 NFL draft.

The North Carolina Tar Heels QB is the first signal-caller to appear in sportsbooks’ lists of favorite top draft picks, even ahead of Deshaun Watson and DeShone Kizer. Trubisky had a breakthrough year in 2016 following Marquise Williams departure for the NFL, starting all 13 games and completing 304 of 447 attempted passes (68%) for 3748 yards with 30 TDs and six picks.

Hooker redshirted his first year at Ohio State in 2014 but went on to play all 13 games in 2015, posting 10 tackles. As a redshirt sophomore in 2016 Hooker took over at free safety and intercepted his first two passes in the first game of the season. Hooker was name to the 2016 First Team All-Big Ten. Hooker decided to forgo his remaining two years of eligibility and declare for the 2017 draft. However, he could not participate in the combine when it transpired that he had undergone surgeries for a torn labrum in his hip and a sports hernia.

Adams had 66 tackles and a sack in 13 games and two starts as a true freshman in 2014 at LSU. He was selected to the second-team All-Southeastern Conference as a sophomore and to the AP All-SEC first team as a junior. And he has better sportsbooks’ odds of becoming the top pick than Leonard Fournette.