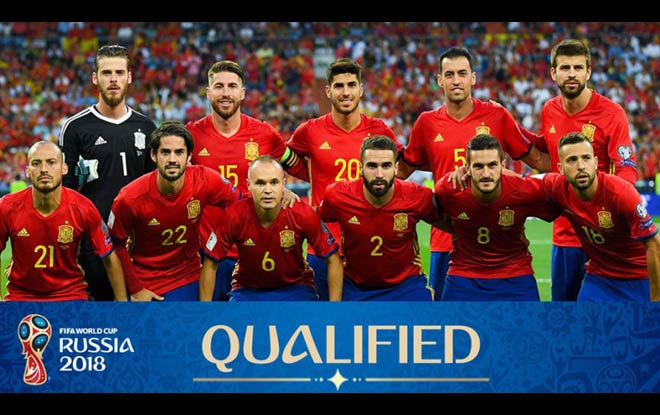 Sportsbook reviews of the Spanish national football team could be read, by the untrained eye, like a movie review. And that movie would be The Fast and The Furious franchise. Which is just one really long movie, right? The Furious part comes from the squad’s nickname. The Spaniards are collectively known as La Furia Roja (The Red Fury). And more importantly, the Fast part comes from the team’s style of play. The Spanish side practice a style of play known as tiki-taka. Developed by Johan Cruyff and perfected by Luis Aragones and Vicente del Bosque, the name tiki-taka was coined by broadcaster Andres Montes. He was referring to the quick, short distance passing of the ball between the players. Or maybe he just had Tourette’s. Tiki-taka also has a dark side, though, described as a “slow, directionless extreme.” Hey, just like The Fast and The Furious franchise!

The Spanish national team had been on a tear between 2008 and 2012, winning two Euros and one World Cup. It thus became the only national team to tally three straight wins of either the applicable continental tournament or the World Cup. Additionally, Spain won FIFA Team of the Year from 2008 to 2013. That’s second only to Brazil. Spain is also tied with Brazil with a 35-game undefeated streak between 2006 and 2009.s However, like Wilde’s Remarkable Rocket, they couldn’t sustain such heights much longer and came crashing down back to the ground. La Roja became, in 2014, the fourth World Cup title holder to be eliminated in the first round. To add insult to injury, they were mathematically eliminated after just two matches. That’s the fastest exit for the defending champions since 1950.

Two years later the Spaniards could only go as far as the round of 16 in the Euro 2016. This string of failures prompted Vicente del Bosque’s departure as head coach. His successor, Julen Lopetegui, has yet to taste defeat in 18 games at the La Furia’s helm. This includes friendly fixtures as well as World Cup qualifying matches. Speaking of which, Spain notched 36 goals during the 2018 FIFA World Cup qualification. The Spanish team accomplished this by scoring multiple goals in many games, and as many as eight against Liechtenstein. It is telling, though, that in nine victories and one draw in 10 games, the one draw was against Italy. The Italians were the only equals to the Spaniards in a group that included the likes of Israel and Albania.

In their World Cup group the Spanish will meet another equal in their peninsular neighbors Portugal. Group B also includes Morocco and Iran. In other words, the top spot will be, barring any unforeseen event, disputed between Spain and Portugal. As we see from the odds in the best online sportsbook websites, Spain is the fave to win the group. And the Red Fury certainly has the manpower to pull it out. David de Gea, Gerard Piqué, Sergio Ramos, Andres Iniesta, Sergio Busquets, David Silva, Isco, Diego Costa. These are some of the biggest names in European football, and they will all be wearing red in Russia. And not precisely because they are neocommunists.

On the contrary, these men aren’t about sharing the wealth. As a matter of fact, they are running a monopoly. Real Madrid, Barcelona, Atletico Madrid and Sevilla have conquered the last five Champions League titles. They have also claimed five of the last seven Europa Leagues. To use a betting term, it’s time for Spain to parlay their continental success into worldwide triumph.