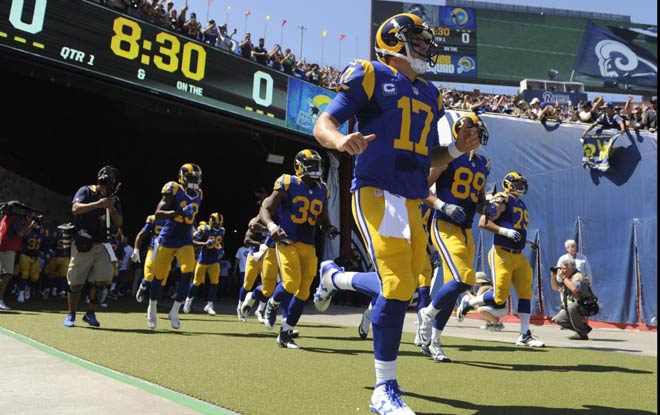 The Los Angeles Rams are 9.5-points home faves over the Seattle Seahawks, according to the legal online sports betting odds. The Horned Ones are coming off their first loss of the season, 35-45 to the New Orleans Saints. The Rams have not suffered consecutive losses during head coach Sean McVay’s tenure. “Don’t let the Saints beat us twice,” he said. “I think our players have done a nice job when you do face small forms of adversity, of not allowing that to affect us moving forward. I think that’s a credit to both the coaching staff and the players. For us, it’s about moving forward in the right way, using this as a good tool and being consistent with our approach week-in and week-out. That’s what we expect to do this week.” Star running back Todd Gurley added that “Everybody’s got to be humbled and this was our day.”

Running back Chris Carson left last week’s game early with a hip injury. He missed Wednesday’s practice and will be reassessed today. Carson rushed for 116 yards on 19 touches in the ‘Hawks’ first game against the Rams. Should he miss this Sunday’s game, Mike Davis and Rashaad ‘Bad’ Penny would share his workload. As Brady Henderson of ESPN writes, Seattle’s “turnaround was sparked by a resurgent running game.” Thus, Carson’s absence would not bode well for their chances. In legal online sports betting trends, the Seahawks are 2-8 ATS in their last 10 games as a double-digit dog. And 1-5 ATS in their last six road games against the Rams.

Few teams can afford to neglect defense in favor of offense. The Chiefs, for example. The Rams tried to Kansas City the Saints and it backfired on them. In general, the Rams have allowed more than 30 points in five games this season. Legal online sports betting trend-wise, the Rams are 5-0 SU in their last five games as a double-digit favorite.