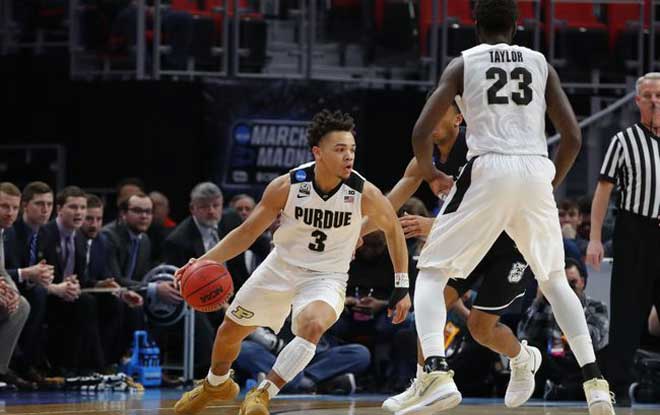 Sweet Sixteen betting is almost over and the final game to wager on is none other than the Texas Tech vs. Purdue matchup. Unlike the other pairing of the day, between Syracuse and Duke, the best offshore sportsbook betting odds are predicting a close matchup. Take a look.

The Red Raiders found plenty of success this season as they finished the year with a 26-9 record to receive a draw in this year’s NCAA Tournament. Things started off feisty as they faced Stephen F Austin in the opening round of the tourney. Texas Tech was able to raid their opponent in a 70-60 winning battle. Afterwards, the Red Raiders managed to dodge a bullet in their Second Round contest against Florida. In the end, the Raiders came out on top 69-66 to advance to the Sweet Sixteen round. Despite that luck, they’re being pegged as the underdog by the best sportsbook odds.

The Purdue Boilermakers delivered an eyebrow-raising 30-6 record this season that made them a clear option for the NCAA Tournament this year. The Boilermakers further drove that point home in the opening round of the tourney where they manhandled Cal State Fullerton 74-48. In the following round, the Boilermakers survived a tough matchup against Butler 76-73. Now Purdue will be looking to deliver a lopsided finish against the Red Raiders.

These odds come courtesy of Intertops sportsbook, a worldwide leader when it comes to online sports betting. Intertops is a great option for bettors this March Madness betting season as they’re stepping up their sign up bonuses as well as their reload bonuses. Not only that, they’ve got one of the easiest interfaces on the web, which makes their site extremely easy to use. Feel free to check out our review on Intertops to get a look at the type of sportsbook bonuses they offer. You can also hop to their site to begin your enrollment process today.

Best Online Sportsbook Prediction: 79-77 Purdue. The Red Raiders will put up a tough fight but Purdue manages to get the job done late in the game. The Boilermakers will rely on their superior offense to lead them to victory. Purdue will also cover the spread and the total will go over.

Best Online Sportsbook Bet to Make: Luckily, the odds out on Purdue straight up are pretty favorable. In fact, they might be some of the best straight up odds of the Sweet Sixteen round. However, if you’d rather avoid taking the money line in this contentious matchup, you can take Purdue to cover the spread or the totals line as well.