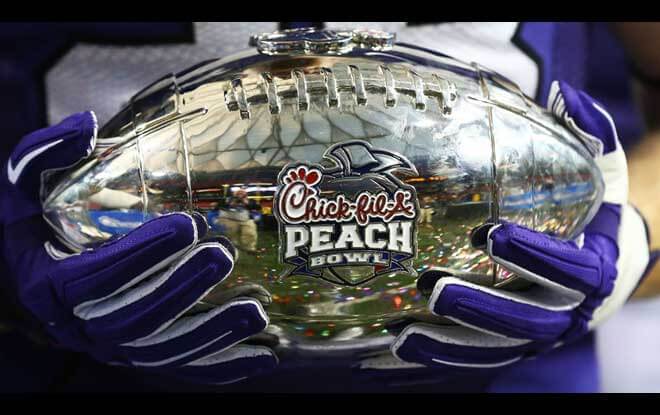 The Central Florida Knights will look to finish the season unbeaten, as they take on the Auburn Tigers in the Peach Bowl on ESPN on New Year’s Day. The Knights played in the AAC and didn’t play a tough enough schedule to get consideration for the College Football Playoffs, but they did get a top New Year’s Day bowl bid. They will be going up against an Auburn team that lost the SEC title game by three touchdowns. Central Florida is getting very little respect from the oddsmakers, as they are nearly a double-digit underdog at the sports betting website.

The Knights are unbeaten thanks to a prolific offense that was the best in the country this season, averaging 49.4 points per game. They were second in pass efficiency with McKenzie Milton. He threw for nearly 4,000 yards this season. “[Milton] matured from last year to this season,” UCF interim coach Troy Walters said. “He understands what we’re trying to do offensively, schematically, and he’s just making plays. He’s making plays with his arms. He’s making plays with his legs. He’s getting the ball into our playmaker’s hands, and he’s doing everything that we’re asking. I think last year he tried to force the ball quite a bit. This year, he understands that he has play makers around him, and he’s just making great decisions, and he’s stepping up on the biggest stage.” Milton threw 35 TDs and had just nine interceptions.

Central Florida may not have head coach Scott Frost who took the head coaching job at Nebraska. Frost has not decided whether he will coach UCF for the bowl game. He was waiting to get approval from both UCF and Nebraska. UFC hired a new head coach in Josh Heupel but he will not coach the bowl game.

The Tigers finished 10-3 this season but the loss in the SEC title game cost them a spot in the College Football Playoffs. Auburn has not played well on the road against ranked team, as they are 5-11 in their last 16 games under Gus Malzahn on the road against top teams. The last time they beat a ranked team on the road or at a neutral site was in 2014.

The big question at sportsbook reviews sites is the availability of Auburn running back Kerryon Johnson. He had 1,320 yards this season. The Tigers do have a good quarterback in Jarrett Stidham but they are not the same without Johnson on the field.

There is no question that both teams can score, but Auburn might have a little bit of trouble if Johnson doesn’t play. We’ll take the big points with Central Florida and also play the game over the total.