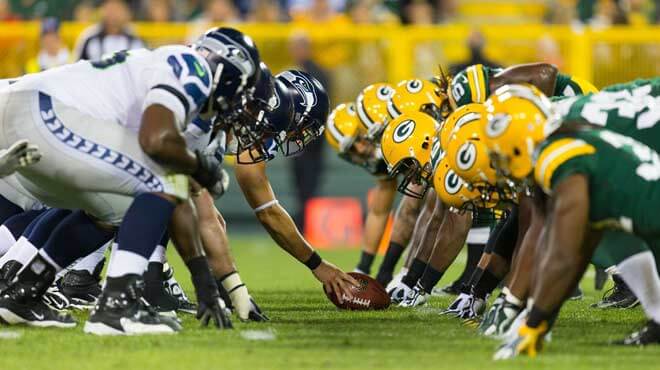 The Green Bay Packers are 3-point road dogs versus the Seattle Seahawks, per legal betting USA odds. Users of the best online sportsbooks may feel they’re getting free points, as we say in the biz, with the Packs. However, as the New York Post’s Brett Lawson writes, “If Seattle is able to sustain drives and keep Rodgers off the field, it should result in a cover and win for the ’Hawks.” To quote Sam Jackson verbatim in Pulp Fiction, “check out the big brain on Brett!” Seriously now. Green Bay is coming off a 31-12 win. While Seattle is coming off a 31-36 loss. But that win was over the beleaguered Miami Dolphins. And that loss was to the upstart Los Angeles Rams. All things considered, it could be said the Seahawks’ loss trumps the Packers’ win.

The Packers are No. 6 in the league with 287.7 passing yards per game. They have scored 17 TDs via the air. Conversely, they rank 14th with 115.6 rushing yards per game. Which is not necessarily bad. But it’ll have to be a lot better considering Seattle’s strong pass defense. Running back Aaron Jones had two TDs on 145 yards on the ground versus Miami. The other Aaron needs to have another big day for Green Bay to cover the legal betting USA spread. The Packers are 0-6 SU and 1-5 ATS in their last six games on the road. On the plus side, Green Bay is 4-1 ATS in their last five Thursday Night Football games.

Offensively, the Seahawks are the mirror image of the Packers. Seattle ranks 22nd in the NFL with fewer than 200 passing yards per game. But they lead the league in rushing yards per game, with 152.2. The problem with the latter stat, though, is that those yards are translating into TDs. The ‘Hawks have scored just six rushing touchdowns. This performance anxiety could hurt their chances against the Packers.

We can’t say enough good things about Aaron Rodgers. He’s the one-legged guy who can legit win an ass-kicking contest. As long as that contest takes place at Lambeau Field. The Packers are 0-4 SU and 1-3 against the legal betting USA spread on the road this season. Green Bay has lost those four games by an average margin of 10.5 points. On the other hand, Russell Wilson is 6-1 SU and ATS in seven Thursday Night games. He has 12 TDs and two picks with a 65.2 completion percentage in those seven games. Finally, Seattle ranks 7th against the pass, which is about the only thing Green Bay can do right. Based on all of that, I would have to the take the ‘Hawks.