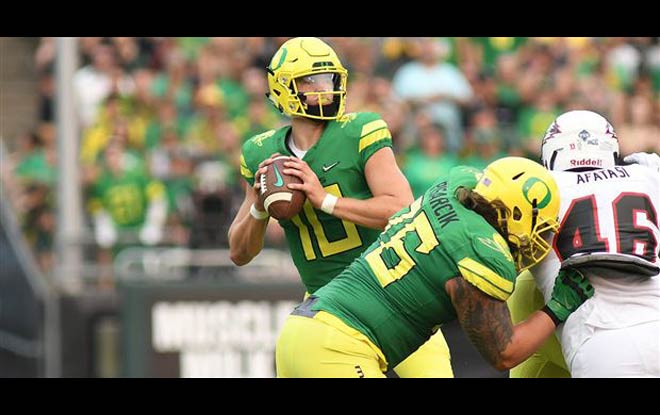 Online College Football sportsbooks have the Ducks as 13.5-point betting favorites over the Beavers. The Oregon-Oregon State rivalry is one of the oldest in NCAA football. The Ducks and Beavers will renew their feud when the two clash in Corvallis this Friday. The Ducks survived a close call vs. UCLA last week. They kept their CFP hopes alive. Meanwhile, the Beavers got their first win of the season against Cal. Oregon has won this rivalry meeting each of the last three seasons.

They stayed away from a ground game that averaged 269 yards in their first two games. They only totaled 88 yards against the Bruins. The other problem that has plagued Oregon through the first part of the season is turnovers.

The Ducks have already had six giveaways this season. Turnovers are never a good sign when it comes to covering point spreads. The Ducks should emphasize ball security as well as the running game against their in-state foes.

Even with the off day on the ground, Oregon still rushes for 208.7 yards per game. They face an Oregon State defense that allows 206.7 rushing yards on the ground in their first three games. Expect starring performances from running backs C.J. Verdell and Travis Dye.

They are led by junior RB Jermar Jefferson. Jefferson has already rushed for 449 yards this season at a pace of 7.2 yards per carry. He’ll be a lot of work for an Oregon defense that allows 5.2 yards per rush and is coming off a game where it allowed 267 rushing yards to UCLA.

The Beavers have been very lax on defense so far. They have given up at least 27 points in each game. The Ducks have allowed a total of 64 points in their last two alone. They’ve also countered by scoring a total of 81 points in that period.

The Oregon State offense can be good, but they may not the energy to keep up with Oregon on the scoreboard. Oregon is the superior of the two teams. They will likely get the win. But until the Ducks can cut down on turnovers and prove they can stop a player like Jefferson, it’s difficult not seeing the Beavers getting two touchdowns at home.

The total for this game is the second-lowest for this matchup in the last eight years. When the Ducks and the Beavers clash, points are usually put up on the board. This rivalry has seen an average of 67.1 total points per game in the last 10 games. And the trend could continue in 2020.