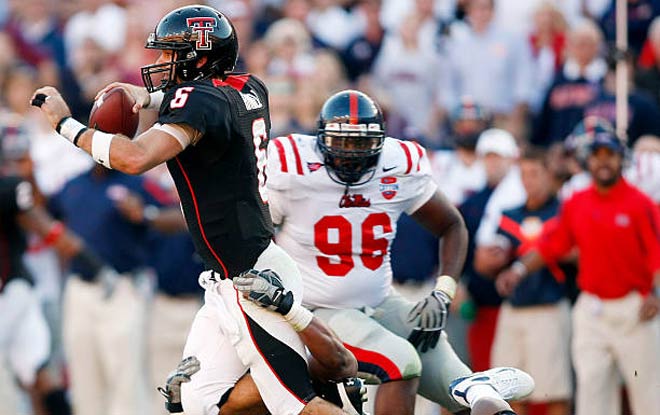 The best offshore sports betting sites favor the Texas Tech Raiders over the Ole Miss Rebels by two points. Mississippi has an ace in the hole, though. You see, the Land Shark is considered the cleverest of all sharks. Unlike the Great White shark, which tends to inhabit the waters and harbors of recreational beach areas, the Land Shark may strike at any place, any time. Ole Miss wide receiver AJ Brown exemplifies the best attributes of the Land Shark. Brown was ranked No. 26 in the ESPN Top 50. Brown, whom ESPN calls “the best pro prospect at his position,” had 72 receptions, 11 TDs, and 1252 yards in 2017. Moreover, he had least 150 yards on five different occasions. DaMarkus Lodge and DK Metcalf round up one of the most fearsome receiving units in the country.

What makes AJ Brown the best receiver in the SEC? Let me tell you a story. Legendary Japanese swordmakers Masamune and Muramasa once held a competition to see who was better. They put one of each of their blades in a stream. Leaves floating towards the Masamune sword would drift safely around the blade. Meanwhile the Muramasa blade drew leaves to the blade, whereupon they would slice themselves in half. Brown is like either of those swords. And opposing defenses are like leaves floating down the stream. In that they would probably rather steer clear of Brown’s 6-foot-1, 225 pound frame. Just ask Mississippi State defensive back Brandon Bryant. Whose hand bounced off Brown like bullets off of Superman’s chest on Brown’s way to a 77-yard TD in the Egg Bowl.

“He’s a very big guy,” Mississippi State safety Mark McLaurin said of Brown. “You don’t find too many like him. He’s very physical and fast.” The Rebels’ offense in general is a force to be reckoned with. And, like Frank Sinatra’s tombstone, the best may be yet to come. “I’m looking for [Brown] to get one year better in this offense,” head coach Matt Luke said. “I think continuity is huge. I think that’s a big advantage we have coming back, is having the same coordinators on offense and defense, being able to keep that continuity and getting one year better.”

The Raiders’ offense was pretty damn good, too. The keyword being “was.” TTU averaged 34.3 points per game last season. That ranked Texas Tech 4th in scoring offense in the Big 12. However, head coach Kliff Kingsbury lost QB Nic Shimonek, wide receivers Keke Coutee and Dylan Cantrell, and running back Justin Stockton. Incidentally, is having a quirky name a requisite to be a part of this team? Anyway. TTU’s offense is a big question mark.

FREE Pick: Ole Miss has just two much firepower in the receiving department alone. So unless Texas Tech’s own offense turns out to be college football’s best kept secret, the Rebels might just pull the upset and cover the small spread.