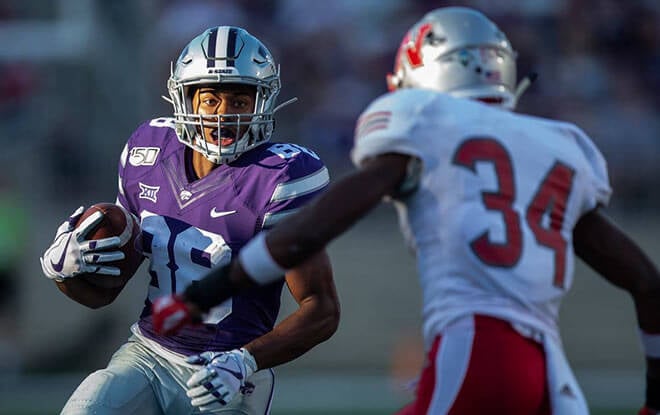 The Cowboys were the single remaining unbeaten team in the Big 12. Following last week’s loss to Texas, the conference will be grasping at straws to send a school to the College Football Playoff this season. If OK State wants any hope they will have to win out in a dominant fashion. That begins this week when they take a trip to Kansas State, where the Pokes are 12.5-point favorites according to the best online sportsbooks.

The Big 12 was putting its hopes on Oklahoma State. But then the Pokes fell short against the Longhorns. They will now have to run the gauntlet in a convincing fashion if they want any hope to make it to the College Football Playoff. There is reason to be optimistic that they can do just that.

This OK-State team takes pride in its defense. It is 10th in the country in total yards allowed per game. That includes ranking 10th against the pass. The Cowboys are allowing 17.4 points per game, but it’s not hard to point out why they lost to Texas. The Pokes outgained the Longhorns by 243 yards but gave away the ball four times. They also allowed a kick return for a touchdown. Fix what needs to be fixed and they should get their bearings back.

The Wildcats are the home dogs per legit sportsbooks. Kansas State is looking for a third consecutive home win to improve their 4-2 record. The Kansas State Wildcats have won seven of their last 10 at home. Will Howard is completing 55.9% of his passes for 741 yards, four TDs and four picks.

Skylar Thompson and Howard have a total of eight touchdown passes this season. Deuce Vaughn and Briley Moore have a total 632 receiving yards and four touchdowns. Chabastin Taylor has 17 catches. The Kansas State Wildcats are averaging 114.5 rushing yards per game. Vaughn has 331 yards and four touchdowns. Kansas State is allowing 26 points and 437.3 yards per game. Justin Hughes has 37 tackles. Drew Wiley has 3.5 sacks. Jahron McPherson has two interceptions.

Kansas State is scrappy but they are down to their backup QB following Skylar Thompson’s season-ending injury a few weeks ago. As a result of that, the Wildcats are 83rd in total yards. Oklahoma State has had problems of its own on offense. Especially on the offensive line. Chubba Hubbard is averaging just 4.6 yards per carry this season. But users of top College Football sportsbooks should look for Spencer Sanders to make the most of a Wildcats secondary that is 81st in the country. They yield 274.2 yards per game. Moreover, they could be without their best defensive back, A.J. Parker.

This Big 12 clash has a very low total. It’s in fact so low it makes you wonder whether the bookies know something we don’t (but don’t they always?). While Oklahoma State’s offense is still finding its footing, it does feature some talented skill position players. It is scoring almost 30 points per game. Furthermore, it’s hard to tell whether this Wildcats defense is able to take advantage of those Cowboys’ flaws. If Will Howard cuts down on the turnovers, the Wildcats should score more than the ten points they did versus West Virginia. And they should find the motivation to find the end zone, what with playing at home. Take the over.