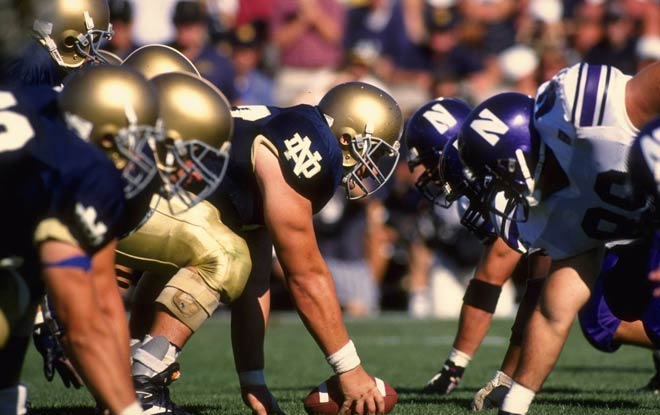 Legal betting USA websites favor the Notre Dame Fighting Irish over the Northwestern Wildcats by 10 points. The Irish were undefeated in this rivalry between from 1965 to 1994. NU has won the last two meetings, but then there was a 19-year gap in between those two games. The last of which took place four years ago. The best online sportsbooks favor Our Lady of the Lake, but the Chicago Tribune believes the Wildcats can beat the odds. Then again, the Chi town periodical also believes it can go the other way around. They give three reasons for each outcome. However, reason No. 3 for NU and reason No. 1 for Notre Dame sort of cancel each other out. For no one can slow Clayton Thorson better than Clayton Thorson can slow himself. Thus, for Northwestern to defeat Notre Dame, Clayton must first defeat Nega Clayton. Or something.

As Cristopher Smith of AL.com writes, don’t expect the Irish’s undefeated streak to come to an end this Saturday. But don’t get your hopes up that they’ll cover the legal betting USA spread either. The biggest spread ND has been able to cover this season is 6.5 points. Starting QB Ian Book is 3-2 ATS since taking over under center. Still, the Irish failed to cover in their last two, as 21 and 22.5 point favorites.

The Wildcats have won four games in a row. Their defense has allowed just 16 points and 255.5 total yards in the last two of those wins. The defensive unit has also forced four fumbles and intercepted two passes in the last three games. However, NU is “a fraud of a Big Ten West front-runner,” says Smith. The Wildcats “beat Purdue on the strength of a plus-3 turnover margin, despite being otherwise outplayed. It also beat a Wisconsin team missing its starting quarterback, and upset a disappointing Michigan State team. It lost to Duke and Akron, tried really hard to lose to Rutgers and got a miracle win against Nebraska.” I guess it’s time to put up or shut up.