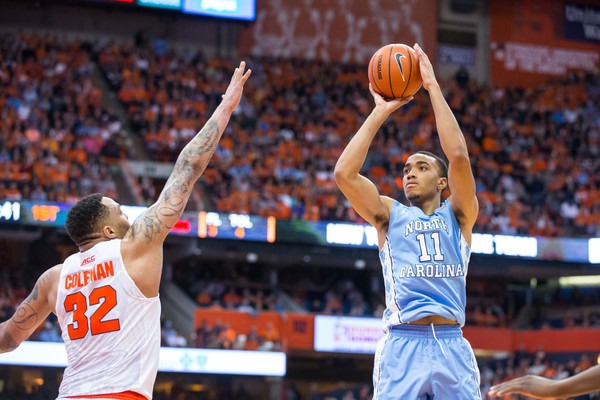 Syracuse somehow, someway reached the Final Four and now they must face the North Carolina Tar Heels. Their improbable run will be the center of attention this weekend as TopBet sportsbook has them as the underdogs to win this Saturday and most likely at the National Championship game, should they pull another epic upset. Their rivals are the most complete and talented team left in the tournament as the Orange faces a near impossible mission. Do they have a good chance of moving on?

Top Sportsbook all over the web have the Orange as the +425 underdogs coming into this game. As amazing as their comeback against the Virginia Cavaliers was, Syracuse is now facing one of their toughest games all season long and they have almost no chance of beating the Tar Heels. They will claw, scratch and fight all they can to win, but their fairy tale run will come to an end this weekend.

Not to take anything away from Syracuse, but basic analysis and logic determines their fate. When they were coming in to their clash against the Virginia Cavaliers experts and pundits for sportsbooks online considered that the Orange could have a way to overcome the Cavs. Their smothering, pesky defense could cause the Cavs to loose focus and turn the ball over. Plus, one could argue that Virginia got complacent and comfortable after that big lead at the half. Jim Boeheim and his players deserve all the credit they got from that amazing second half, but let’s not get carried away here.

The Tar Heels are a powerhouse that is averaging 16-point margins on all their wins all through out the tournament. Sportsbooks online have them as the favorites and experts in online sportsbook reviews all agree that they are the smart pick to win it all. It might be tempting to pick Syracuse (specially after news of the bettor who could win $100k on his bet for Syracuse to win the Championship), but the smart play is to put your money on the team that has been consistently demonstrating their worth game after game.

Just how good are North Carolina? Well, VERY good. Bryce Johnson has been phenomenal and arguably he might be the top player of the tournament right up there with Buddy Hield from Oklahoma. Also, the Tar Heels have some amazing balance between offense and defense has been amazing this entire tournament, and their bench have been producing, helping this team roll over the competition. Isaiah Hicks, the sixth man of the year, has put in some amazing contributions to the Tar Heels championship efforts. The overall consensus is that North Carolina has all the right pieces to win it all against any of the teams in this Final Four. Also, they are high scoring machines that will more than likely cover the point spread on all sportsbooks online. Despite Syracuse’s best efforts and their great defensive skills, there is so much they can do. In the end, after a valiant effort, North Carolina will come out as victors ny a double digit margin.