NFL Week 13 Cowboys vs. Vikings Analysis and Place to Bet 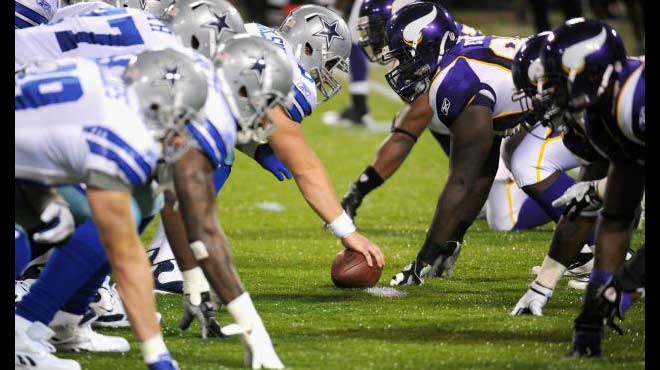 The Dallas Cowboys are road favorites on Thursday night football betting game as they visit the Minnesota Vikings in a game that can be seen on NBC. The Cowboys boast the league’s to record at 10-1 while the Vikings are 6-5. Both teams played on Thanksgiving so they will have had a full week to get ready for this matchup. The Cowboys outlasted the Redskins 31-26 while the Vikings lost 16-13 at Detroit. Let’s look at the matchup and Week 13 NFL picks.

The Cowboys visit the Vikings on Thursday, December 1st with a start time of 8:25 pm Eastern on NBC.

NFL Odds at Sports Betting Sites for US Players

The Cowboys just continue to roll along as they are 10-1 on the season but they did suffer a pointspread loss last week as they failed to cover against Washington to drop to 9-2 ATS. The Cowboys are scoring just over 28 points per game which is 3rd best in the league while they are giving up 19 points per game which is 5th best in the league. They have a powerful duo of rookies in Dak Prescott and Ezekiel Elliott and the best offensive line in the NFL.

“The offensive line is unbelievable,” Minnesota head coach Mike Zimmer said. “They’re by far the best in the league that I’ve seen. Smith is the best lineman in the league by far. But they’ve got a lot of big, physical guys.” Zimmer also had high praise for Elliott saying, “The back is special, he’s a physical, impact player that can make all the cuts. He’s great. He reminds me of Emmitt (Smith) in a lot of ways. He’s got speed to the perimeter, he catches the ball well, he’s good in protection.”

The Vikings come into this game at 6-5 SU and ATS. They started the season 5-0 but have since dropped five of their last six. The offense isn’t doing much as the Vikings score just 19.8 points per game which is 25th in the league while the defense is 2nd allowing just over 17 per contest. The Vikings have cornerback Xavier Rhodes who leads the team with four interceptions.

The only way the Vikings can win this game is to keep it low scoring so I will take the game under the total at sports betting sites for US players.