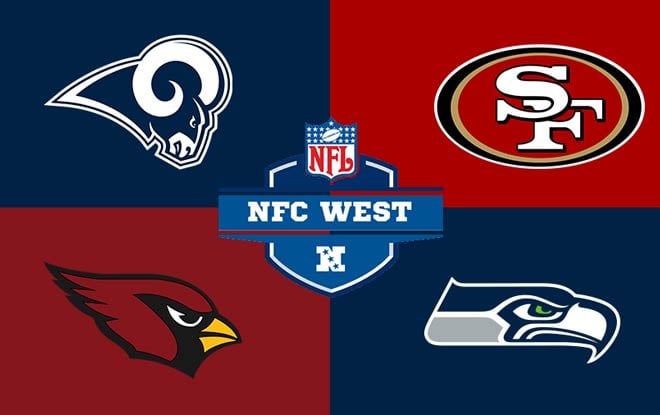 The best sportsbooks favor the Los Angeles Rams to repeat as NFC West division champions. In 2017 the Rams won their 16th divisional title, though it was only their first since 1985. The Horned Ones don’t want to be a throwback to the 80s so much as the 70s. The Rams won seven straight divisional championships between 1973 and 1979. And speaking of dominance, the San Francisco 49ers would like to reassert themselves as the top dogs in the division. The Niners have not won the NFC West since 2012, which was heretofore their last trip to the Super Bowl.

Head coach Sean McVay may seem like nothing short of a miracle worker. The truth is though that he had and has plenty of talent with which to work. For example, running back Todd Gurley was en fuego last season. He missed one game and yet managed to lead the NFL in touchdowns (19) and yards from scrimmage (2,093). Gurley is deadly on the ground, but won’t turn down a pass from starting QB Jared Goff. Speaking of whom, Goff has added a new target to his repertoire in the form of wide receiver Brandin Cooks. Defensively, the Rams traded away defensive end Robert Quinn and linebacker Alec Ogletree. Moreover, cornerback Trumaine Johnson left to the Jets. Conversely, the Rams brought in defensive tackle Ndamukong Suh, cornerbacks Aquib Talib and Marcus Peters.

Judging by the home stretch of the 2017 season, QB Jimmy Garoppolo was the missing piece in head coach Kyle Shanahan’s puzzle. According to the best sportsbooks, the Niners went 5-0 SU and 4-1 ATS in Jimmy G’s five starts. San Fran’s receiving unit is somewhat thin. However, the 49ers signed wide receiver Jerick McKinnon to add some depth to the position. In the secondary, the defensive line features defensive tackle DeForest ‘Kelly’ Buckner and defensive ends Arik Armstead and Solomon Thomas. Additionally, defensive coordinator Robert Saleh will try to squeeze some big plays out of veteran corner Richard Sherman. The Niners may not win the NFC West, but they’re almost a shoo-in for a Wild Card spot. And that’s not nothing.

Russell Wilson is one of the best QBs in the game today. Not least because of his ability to make plays in the absence of a competent offensive line. It’s too bad Doug Baldwin is about the only guy to whom he can throw the ball. As far as wide receivers go, though, Baldwin may be worth several of them. Like Alec Baldwin is worth several of his brothers. On the ground, the ‘Hawks hope rookie Rashaad ‘Bad’ Penny and a healthy Chris Carson can alleviate the team’s rushing woes. After all, Wilson can run as well as he can pass, but he can’t be expected to do everything. Defense-wise, the final remnants of the Legion of Boom have dispersed, including the aforementioned Sherman. In their stead, linebackers Bobby Wagner and K.J. Wright will lead a secondary that includes up-and-comers like defensive end Frank Clark and defensive tackle Jarran Reed.

The Cards’ best sportsbooks bet is that ‘I Am’ Sam Bradford is experienced enough and rookie Josh ‘The Chosen’ Rosen is healthy enough. Thus, between the two, they might combine for one real, actual QB. The good news is that running back David Johnson is finally returning from injury. Johnson led the league in touchdowns and yards from scrimmage in 2016, but played just one game last season.

These odds were taken from GTBets.eu, one of the best online sportsbooks. Be sure to check their mobile betting platform.