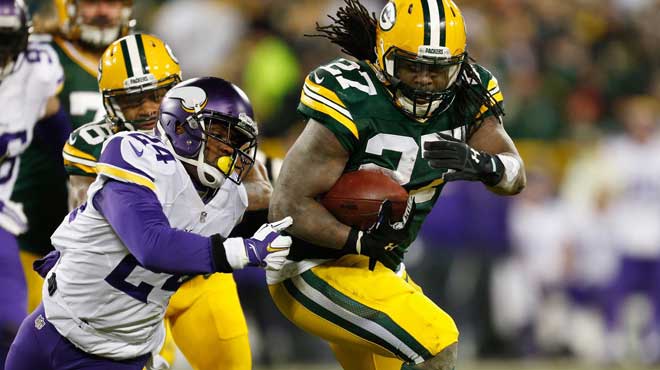 The Green Bay Packers and Minnesota Vikings will meet up on Monday night at 8:15 PM ET.

US Bank Stadium in Minneapolis is the venue for this game, which is televised by ESPN.

BetAnySports customers can watch this game and place wagers in real-time by accessing Sports Betting Ultra.

Green Bay leads the NFC North with an 11-3 record (9-5 against the spread). Minnesota is 10-4 straight-up and 8-6 versus the number. Next week the Packers are visiting Detroit, while Minnesota will host Chicago.

Green Bay will clinch the division title with a victory, while a Minnesota win takes this down to the final week.

It will also even up the season series. On October 15, the Packers registered a 21-16 win, despite 188 rushing yards from the Vikings. Kirk Cousins went just 14 of 32 and Minnesota committed four turnovers.

Dalvin Cook, who has 1135 yards, is out of this game with a shoulder injury. In addition, Alex Mattison, the backup, is listed as a game-time decision with an ankle injury. It was reported by ESPN that Mattison would not make the start.

This leaves Mike Boone as the starting tailback, in all likelihood. He’s not had a lot of playing time, rushing 21 times for 97 yards.

So what kind of position is Minnesota going to be in to exploit the biggest Green Bay vulnerability, which is defending the run (4.6 ypc allowed)? Maybe it depends on how much of a difference-maker you believe Cook is. He had 154 yards in the first meeting between these teams, keeping the Vikes in the game. Minnesota runs the ball 49.9% of the time, so this is an important consideration.

Here are the numbers….

In the Monday Night Football odds posted on this game by the folks at BetAnySports, the Vikings are favored at home:

And you can get a price better than -110 if you access reduced juice. It’s as good a deal as you can get in the sportsbook business!

What about Aaron Rodgers?

Rodgers was voted to the Pro Bowl this past week, and that brought some raised eyebrows. That’s because his stats aren’t necessarily as good as others, namely Kirk Cousins, who has thrown 22 TD passes with just three interceptions in his last ten games.

Yet Rodgers has been intercepted only twice this season. And some who have observed him, believe he is incredibly comfortable in Matt LaFleur’s offensive scheme. Offensively, the Packers are first in converting red zone opportunities into points. Rodgers also has nine first-quarter touchdown passes. So Green Bay could get out of the gate early and make Minnesota throw more often than they intended.

As good a year as Cousins has had, what sticks out like a sore thumb is that he is 0-8, both straight-up and against the spread, on Monday Night Football.

The Vikings have been very formidable at home since Mike Zimmer has been the head coach. They have gone 31-14-1 ATS overall, and 25-10-1 ATS as a home favorite. That’s 71.4%, and that’s outstanding.

Minnesota’s defense depends a lot on turnovers, and Green Bay (particularly Rodgers) is pretty good at avoiding them. We think the absence of a game-breaker like Cook is something significant. And until Cousins can get that Monday night monkey off his back, well, we are inclined to grab the points with the Packers, who still have a chance to be the #1 seed in the NFC.

BetAnySports has some great ways for you to enjoy your Monday night experience. This includes reduced juice for better odds, along with Sports Betting Ultra, which enables real-time wagering…….. Get your account open with a debit or credit card, person-to-person transfer or the virtual currency of Bitcoin, which is fast and easy with their automated system, and NEVER incurs a transaction fee!