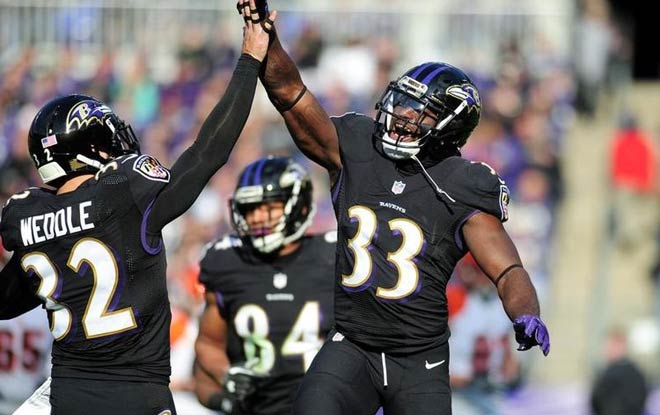 BetOnline customers may have noticed a difference between this year and last for the Baltimore Ravens. We’re talking about how they have been moving the ball down the field. Or rather, how they are NOT doing it with the aplomb they exhibited last season.

It’s been difficult to get a real barometer on the Ravens over the last few weeks. Naturally, that’s because the absences due to the coronavirus cut deeply into the roster. Against Pittsburgh, they had a skeleton crew. And frankly, beating the Dallas Cowboys is not an incredible feat.

At the moment, they are sitting with a 7-5 record (6-5-1 against the points). And they are duking it out with other teams for a possible spot in the playoffs.

One of those teams is the Cleveland Browns, who were expected to be a force to be reckoned with last season. But their arrival appeared to be a year late, as they are second in the AFC North with a 9-3 mark (5-7 ATS).

On Monday Night Football, the Ravens can draw to within a game of the Browns with a victory. But they will be playing against a team that is thirsting for revenge, and they will have to take their show on the road. Kickoff is slated for 8:15 PM ET at FirstEnergy Stadium in Cleveland.

Here are the numbers

In the Monday Night Football betting odds that have been established on this game by our friends at BetOnline, the Ravens are the road favorites:

Remember that you can get greatly enhanced payouts on pre-selected parlays with Odds Booster, and that happens every day of the week!

When the Ravens had to put almost twenty players on ice against Pittsburgh because of COVID-19, they had to play without Heisman Trophy winner Lamar Jackson, who also happens to be the league MVP. They replaced him with Robert Griffin III, another Heisman winner, who wound up with a hamstring injury.

Jackson is back, and he showed some signs of regaining form, at least with his legs. He had 94 yards on the ground against Dallas, and that included a sizzling 71-yard TD. Lately, however, he’s throwing for only about six yards an attempt, and he’s only had a few occasions where he’s topped 200 yards through the air.

Baker Mayfield has also been a Heisman winner, although he’s had more problems finding himself in the pros. But he may have had a watershed moment last week. Against the Tennessee Titans, a genuine contender, he had four TD passes in the first half. That highlighted an explosion that had the Browns out to a 38-7 lead. The game was not as close as the 41-35 final indicated.

Browns out for revenge

Cleveland was humbled in the first meeting between these teams. As seven-point underdogs at M&T Bank Stadium, they lost 38-6, and Mayfield averaged just over four yards per attempt. If there was good news, it was that the Browns held Baltimore to 107 rushing yards. But that’s really cold comfort.

That was right at the start of the season. The Ravens had been like a runaway train on offense last year. But since all of that, Baltimore has demonstrated itself to be much more ordinary offensively. They are, at the moment, ranked only 22nd in the NFL in Total Offense. And that is certainly not where coordinator Greg Roman intended them to be.

That having been said, these are the NFL’s top two teams in rushing. So would there be any secret as to what they are trying to accomplish? If you were to take a look at the Browns and Ravens, Cleveland has the better running back combo. Kareem Hunt and Nick Chubb can produce more than Mark Ingram and JK Dobbins.

Of course, the difference-maker there is Jackson, who set a record in 2019 for most rushing yards by a quarterback.

Some of that stuff from Jackson comes from designed runs. Some comes from scrambling out of the pocket. It stands to reason that a big key will be if the Browns can contain Jackson when he improvises. And that is where Myles Garrett, emerging as an All-Pro defensive lineman, comes into focus.

The Browns have grown up since that opening-game loss to Baltimore. And whatever first-year coach Kevin Stefanski has been preaching is sinking in. There is a better spirit in the locker room without the toxins set off by Odell Beckham (or so we hear).

Meanwhile, the Ravens have regressed from last season. There is no air of “awesomeness” behind what Jackson and the offense are doing. And the Browns can advance on the ground against this opponent. We’ll take the points with them at home.

BetOnline customers get a lot of advantages, which include live betting and the most comprehensive collection of props available on the games that they’ll be playing in the NFL…… And remember that when you want to deposit, they accept a wide variety of cryptocurrencies for payment, including Bitcoin!