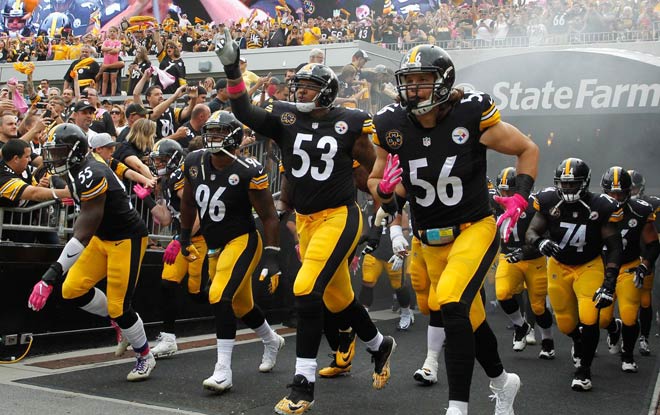 Don’t look now, but the Miami Dolphins appear to be making some progress. While they may indeed still be the worst team in the NFL, at least there are other teams, like the Washington Redskins and Cincinnati Bengals, who are part of that conversation.

Or maybe we are just “seeing things”? Maybe we will get some more insight on Monday night. That’s when Miami pulls into Heinz Field to play the Pittsburgh Steelers in a game that begins at 8:15 PM ET on ESPN.

You know, BetAnySports customers can have their TV or mobile device tuned into the game, while at the same time placing wagers through the technology available from Live Betting Ultra.

The Steelers did pretty well with Devlin Hodges at the helm, beating the Los Angeles Chargers. So they at least know they can count on him in a real pinch.

Rudolph went off the field against Baltimore with a concussion a few weeks ago. But that’s where the bye week comes in handy. Because that allowed him to get out of the concussion protocol and back behind center.

Rudolph, the second-year man out of Oklahoma State, says he now feels “great” and is ready to go. But keeping him upright is going to be a big priority, which is why it’s good news that the Pittsburgh offensive line has been – statistically anyway – the best in the league in pass blocking, allowing only six sacks on the season.

Rudolph has completed 67% of his passes with seven touchdowns and two interceptions. He says he could have conceivably played against the Chargers, but won’t argue with doctors’ decisions, saying,  “It was the best thing for my long-term health. We’ve got a lot of specialists here, so I complied with their thoughts.”

And now the Monday Night Football betting odds on this game, with the Steelers favored by quite a bit:

Keep in mind that if you are signed up with BetAnySports, you will have the opportunity to get a better “vig” than -110 as you access “reduced juice.” It’s only available through the website, but available now!

How about those Dolphins?

Things started horribly for Miami, as they were outscored 163-26 in their first four games. We don’t want to make it sound like they have made a complete turnaround. But they haven’t necessarily played like sitting ducks over the last two games.

In fact, they have covered big pointspreads in the last two. They made a nice comeback against Washington, with two TD’s to put themselves in position to go to overtime. And if they hadn’t attempted a two-point conversion, they may have wound up winning. They looked very tough last week against Buffalo, leading 14-9 going into the fourth quarter. And it was no accident either. Then the Bills surged for 22 fourth quarter points (the last seven on a TD return of an onside kick), making the final score 31-21.

The one thing in common in these two competitive efforts is Ryan Fitzpatrick, who was inserted into the lineup by coach Brian Flores against the Redskins and led the comeback, then threw for 282 yards against the Bills. He will continue at quarterback, and although he’s had his ups and downs, the team seems to be more confident with him.

While Miami’s upper management appears to have saved their hopes until next year, the players aren’t folding the tent. They’re still playing hard, and Fitzpatrick gives them a better chance to win games than Josh Rosen.

Don’t forget that Pittsburgh has suffered offensively since the loss of Ben Roethlisberger. They are currently ranked 28th in passing offense and 26th in rushing. And Rudolph has been orchestrating a rather conservative offensive game plan.

If Fitzpatrick doesn’t go off the rails, Miami has a chance to keep this game relatively competitive, so we’d be inclined to take the points.

Monday nights are so cool when you are signed up with BetAnySports, because you not only get reduced juice for better odds and Live Betting Ultra for real-time wagers, but also a lot of props you can partake of. Keep an eye out for that………. Visit the Lucky Live Dealer Casino after the game too…….. Open an account with debit cards, credit cards, person-to-person transfers or the digital currency of Bitcoin, which is fast and easy with their automated system, and NEVER incurs a transaction fee!