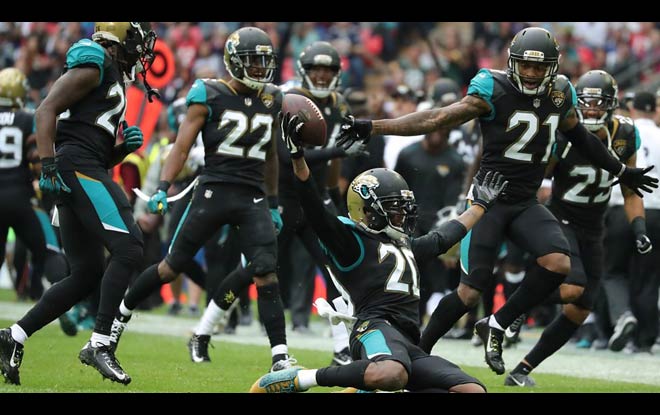 Sites for betting in the NFL, as well as everyone else, must give Jacksonville Jaguars head coach Doug Marrone credit. It takes a very brave man to start Blake Bortles under center in all 16 regular season games. And all three playoffs games. Any other guy would have been afraid to have the men with the butterfly nets come after him. Also, it takes a very lucky man to have that gamble pay off. And it was no doubt a marquee year for the King of Garbage Time as well. Bortles threw 13 interceptions. Lucky 13 alright. Tom Brady would probably take a bath with a toaster if he threw 13 picks in a single season. But for Blake it’s a career best. That’s the fewest interceptions he has thrown in a single year. Moreover, he didn’t throw any in the postseason. Yay!

Odds taken from BetOnline.ag sportsbook, one of the top sites for betting in the NFL.

The Jaguars finished 10-6 last season. That was an improvement from 3-13 the previous year, and their first winning season since 2007. Additionally, the Jaguars returned to the postseason after a decade. Now, if Marrone wants to make it back-to-back postseasons, he needs Bortles to be in playoff-mode from Week 1. Blake is at his best when he does the least. The fewer decisions he makes, the fewer mistakes he makes. It’s no wonder the Jags’ rushing game was the best in the league (141 yards per game).

Defensive coordinator Todd Wash also deserves praise. J-Ville’s defense topped the NFL in many categories. Forced fumbles (17). Completion percentage (56.8). Passing yards allowed per game (169.9). Passer rating (68.5). Defensive touchdowns (7). Quite the laundry least. Sites for betting in the NFL will certainly have to keep an eye on the Jags this season.

At New York Giants. The Jags have yet to beat the Giants on the road in their short all-time series.

At Kansas City Chiefs. The Jaguars have lost their last three straight against the Chiefs, including two trips to Kansas.

At Dallas Cowboys. The Jags are 2-2 against the Cowboys in Dallas.

At Indianapolis Colts. The Jaguars swept the Colts in 2017.

At Buffalo Bills. A rematch of the AFC Wild Card game from earlier this years, which the Jags won 10-3.

At Tennessee Titans. The Jaguars were swept by the Titans last season.

At Houston Texans. The Jaguars swept the Texans in 2017.