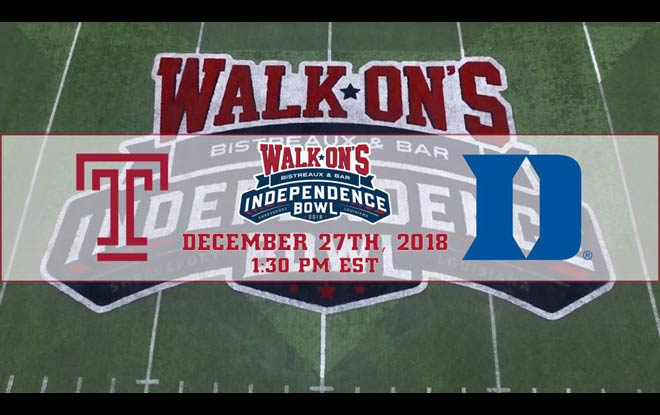 The Temple Owls are 4.5-point favorites over the Duke Blue Devils, according to top betting sites. Temple finished second in the AAC’s East division, posting an 8-4 record (7-1 in conference play). Additionally, the Owls finished the regular season with an 8-4 ATS record, per the best online sportsbooks. Their previous game was a 57-7 routing of Connecticut as 31-point road dogs. This will be the Owls’ fourth straight bowl appearance and eighth overall.

Duke finished sixth in the ACC’s Coastal division, going 7-5 (3-5 in conference play). Moreover, the Blue Devils went 6-6 ATS. They wrapped their regular season with a 7-59 trouncing at the hands of Wake Forest, even though Duke were 9.5-point home faves. This will be the Devils’ second straight bowl bid and 14th overall.

Let’s start with the veggies. It is with a measure of disbelief that Steve Wiseman of the News & Observer admits Duke has NFL prospects. And for dessert, at least these prospects will not skip the Independence Bowl. Two of them are linebackers Joe Giles-Harris and Ben Humphreys. They’re a bit banged up, so they may not play in spite of their best intentions. “I don’t think that’s a Duke thing,” Humphreys said of skipping a bowl game. “We’re going to play every game that we can. We’re going to do it because we love the guys around us. I don’t think that will happen at Duke.”

The other player is starting QB Daniel Jones. He has yet to decide whether he’ll enter the 2019 NFL draft. However, his mind is made up regarding the Independence Bowl. Jones had one TD and one pick on 145 passing yards in the Wake Forest debacle.

The Owls will be playing their first game without head coach Geoff Collins in two years. Collins was announced as Georgia Tech’s new head coach in early December. Many of the players, though, had already experienced a coaching change when Matt Rhule left for Baylor. “Half the team already experienced it. …So those guys can turn around and say to those guys, ‘It’s OK,” interim head coach Ed Foley said. “No one was real happy, but the maturity of the way that it went down was better than it was two years ago, for sure it was.” So you see why this turn of events didn’t affect Temple’s odds at the top betting sites.

Our Game Prediction: Duke went 4-0 SU and 3-1 ATS against non-conference opponents this year. They defeated Army, Northwestern, Baylor, and North Carolina Central. That bodes well for their chances versus Temple. However, the Blue Devils pretty much went through Blue Hell following that strong start. In a reverse scenario, Temple faltered at the beginning but then found their footing. The Owls enter this bowl game with momentum on their side. As such, users of top betting sites should take them and the points.