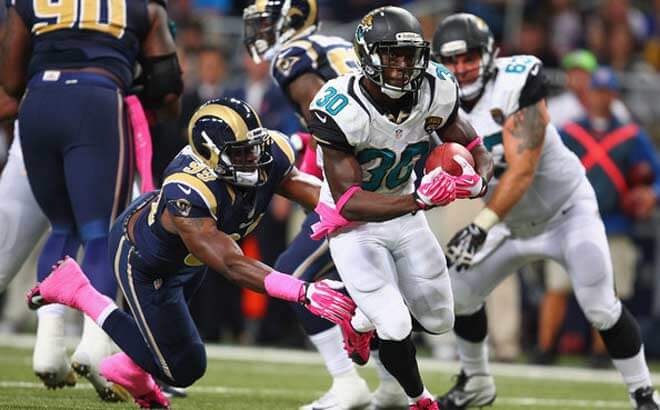 The Jacksonville Jaguars will host the Los Angeles Rams this sportsbook online betting Sunday; two franchises who have shined at times this season will try to outdo each other to prove to online NFL betting fans that they truly are postseason contenders. The Jaguars have picked up wins over the Houston Texans, Baltimore Ravens and Pittsburgh Steelers so far this season. For comparison, the Rams have defeated the Indianapolis Colts, the San Francisco 49ers, and the Dallas Cowboys so far in 2017. Clearly, Jacksonville has the more impressive record of the two. And while a win over Los Angeles wouldn’t do a whole lot for Jacksonville’s reputation, a loss certainly would. Let’s see which team the best sportsbooks on the planet are siding with this Sunday.

The Rams charge into this weekend’s contest sporting a 3-2 record that ranks them 2nd in the NFC West. Los Angeles had an opportunity to defeat the Seattle Seahawks, who currently lay claim to the division, and take the West for themselves in Week 5 when they traveled to Seattle to take the Hawks on, on the road. The Rams gave it all they had but Seattle ultimately proved that it’s too difficult of a place to pull out a win. Nonetheless, the Rams need to get right back on the horse before they fall too far behind the Seahawks in the playoff race.

The Rams will once again be playing on the road this Sunday and it looks like good sportsbooks are predicting another loss for Los Angeles. The Rams have better statistics on offense, gaining 30.4 points per contest to Jacksonville’s 27.8. However, the difference is even more staggering on defense – against the Rams. Los Angeles allots 24.2 to their opponent which starkly contrasts against the Jags’ 16.6 average. They say defenses win championships and we’ll have to see if Jacksonville’s can win them this contest on Sunday. The Jags do have a knack for causing turnovers, as does the Rams’ defense, so fans can expect a bit of a back and forth this Sunday.

The Jaguars sneak into this Sunday’s game with a 3-2 record that surprisingly gives them the lead in the AFC South. Before the season commenced, no online NFL betting fan was picking the Jags in the South. And even though it’s way too early to wrap up the divisional race and give it to the Jags, Jacksonville does stand a chance of winning this darn thing.

The Texans have been doing all they can with Deshaun Watson and although the rook has looked great this season; their offense isn’t elite and their defense just lost JJ Watts. Andrew Luck hasn’t returned for Indianapolis and it’s no guarantee that they’ll be that great with him considering they were 8-8 last year. And the Tennessee Titans still haven’t found their identity, going from good to bad each and every week. So with so much uncertainty in the South, why not pick Jacksonville to win it all?

That doesn’t mean you should pick them to win this game however. The Rams may be giving up a few more points than the Jags but that’s no guarantee that Blake Bortles will be able to find the end zone this Sunday.