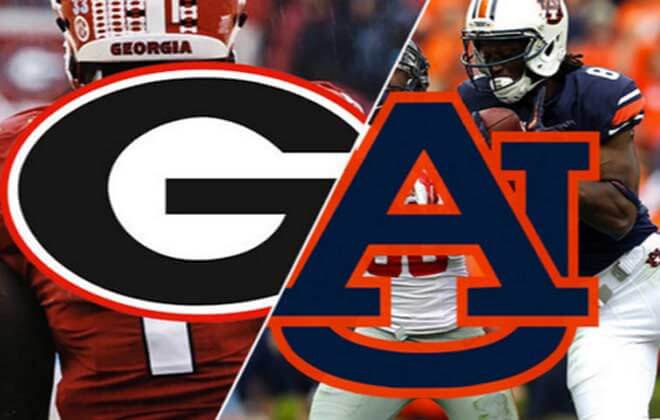 The Georgia Bulldogs have mounted an impressive win streak this season, beating 9 opponent’s in a row including 2 nationally ranked programs. Deservingly, the Bulldogs are currently ranked No.1 in the nation. It’s a prestigious title but most importantly, it guarantees Georgia a seat in the college football playoffs – where good sportsbook players will agree it matters most. This upcoming weekend, the Bulldogs will be looking to retain their eminent title by delivering a strong performance against the No. 10 team in the country: the Auburn Tigers. Let’s take a look at what the best sportsbook betting lines on the web are offering for this Saturday’s enticing matchup.

As mentioned above, the Bulldogs are 9-0 on the year ranking them 1st not only in the nation but also in the SEC – East standings. Georgia is coming off an 8-5 season that earned them an invitation to the Liberty Bowl, where they triumphed over TCU 31-23. However, despite finishing the season out on a high note, good sportsbook players would agree that the Bulldogs are enjoying an unprecedented amount of success this season. It’s only Kirby Smart’s 2nd year at the helm but he’s already proven that he’s capable of leading this team to a No. 1 national ranking. Nevertheless, there’s still 3 games left on the schedule and the Bulldogs will need to finish 2017 on a high note in order to solidify their spot in the playoffs.

Looking over both team’s numbers, its clear this will be one of the best matchups of the year. The Bulldogs come into this contest averaging 36.6 points per game while allowing 11.7 each weekend. The Tigers on the other hand, put up 36.9 per game while allotting 16.9 to their opponent’s. With that in mind, it’s clear whichever defense performs better this weekend will win the game for their program.

The Tigers pounce into this Week 11 matchup contest with a 7-2 regular season performance that has convinced the AP that Auburn merits a No. 10 nationwide ranking. Considering the level of competition they’ve faced so far, and how well the Tigers have performed against the top teams in the country, the ranking is well-deserved. Auburn’s two losses on the season have come against the Clemson Tigers, 14-6, and against the LSU Tigers 27-23. Luckily for Auburn, they won’t have to face any more Tigers on the year. But that doesn’t take away from the challenge they’ll be facing this Saturday. Notwithstanding the fact that they’ll be facing the top team in the country, sportsbooks for US players are giving Auburn more than a fighting chance this weekend.

The Tigers are slight underdogs against the Bulldogs and the 2 point prediction on the spread line makes it clear that online sportsbooks believe that this game will come down to the wire. Fans looking to bet the spread this weekend might want to avoid backing the Tigers on the spread this weekend since both their losses have been by 4 or more points. Furthermore, Auburn is 1-1-2 against the spread at home this season, which doesn’t inspire a whole lot of confidence. Instead, sportsbook players should try to cash in on those favorable odds available on Georgia.

It’s never been just about a dream, it’s about the work we do to keep the dream alive. #ATD pic.twitter.com/szMlC76RsC